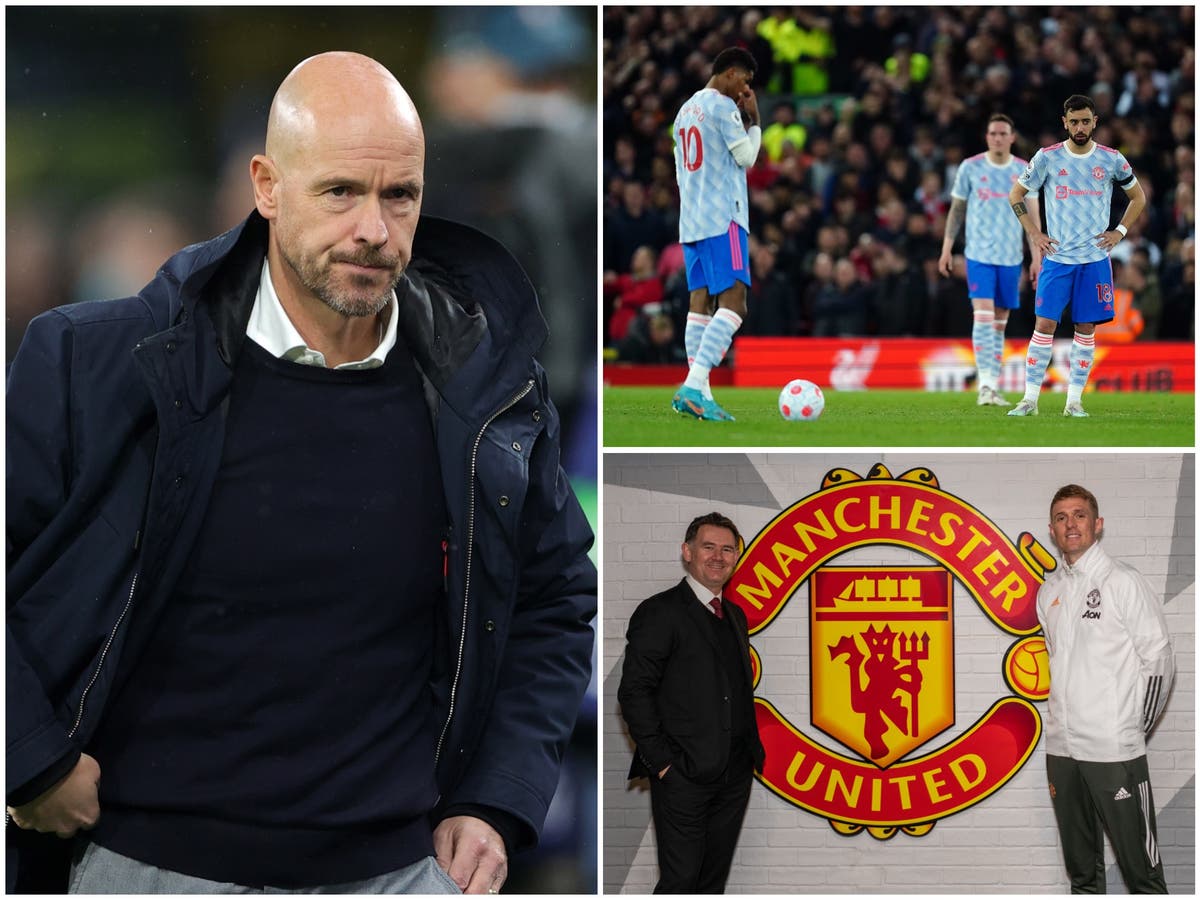 When the Manchester United squad were told of Erik ten Hag’s impending appointment, the response was described as “mixed”, but one specific response stood out. Some players were totally indifferent, because they don’t want to be around to find out.

It sums up the magnitude of the challenge. Despite all the buzz around Old Trafford following Ten Hag’s announcement, there was also some unease about how long it will take for reality to check that excitement.

The current reality is that United are coming off a 4-0 loss to Liverpool which was as pitiful as it was predictable, making it a collective 15-1 in four games against the front two, who also happen to be their two greatest rivals. .

The occasion showed such disparity between clubs that the only logical response should be to question what Liverpool have been doing and seek to bring it to light. It’s curious, though, because that was the exact question posed to former executive vice-chairman Ed Woodward during a meeting at United’s London base in 2019. Why not just do what Manchester City are doing? and Liverpool, identify a modern ideology and go from there?

Woodward replied that United deliberately did not have a set style as they wanted “some flexibility” so managers could work within wider parameters. There is certainly some counter-intuitive business logic to this, but the stark truth is that it still went against what is widely regarded as the best practice in football.

That’s also what Ralf Rangnick is practically shouting at the club now. He repeated it before the Liverpool game and after, while setting out the guiding principles when asked what United could do to catch up.

“The title of everything should be ‘how do you want to play’!” he said.

The situation has been hugely frustrating for Rangnick and has only reaffirmed how off the charts United are. The last few days have been dominated by talk about how long it will take for them to return, especially from the caretaker manager.

This is also why he can – repeat, can – be a source of optimism.

For all the problems at United, they can reach a clear roadmap. This track record can also be followed much faster if you can pay the salaries the club is capable of. Such money means United are able to succeed even under the Glazers, and the continuing effects of that dismal 2005 leveraged buyout. clear sign of their potential power. They are arguably the only English club that can really take on City in terms of financial might. Imagine that money spent properly.

That’s why Rangnick said “it’ll take two or three windows if you know what you’re looking for”. They need to know where to turn. Rangnick and even Ten Hag made certain steps clear in the meetings.

If you had a really clean slate, which many would say this season should bring, you can work from the top of the club. The repeated line of footballers at The Independent was that, in fact, “it’s all about simplicity”. “It’s not rocket science,” as Rangnick himself said.

A club first needs a good experienced general manager, who surrounds himself with an empowered sports director. The point here is not the obvious to hire the best people for the top positions. This is something that is actually not clear at United: that footballers are responsible for making key decisions within their remit. You then get those same numbers to identify and articulate a football ideology, from which everything else flows. That’s what Rangnick meant by “title over everything.” This ideology should inform every decision, from the choice of coach to all signings. This means that there is much less opportunity for wastage.

The recruiting department then needs to be built to the highest possible standards, and driven primarily by old-school scouting knowledge and modern data analytics, both of which are given high priority over agent relations. Such an approach – which is not as common as one might expect – would mean the ability to contextualize how a player will perform in your system, which is still the most important factor in signing players. Of all this, a sporting director should have the final say on all signings within an existing budget. The club are also expected to be ruthless with outgoing players, due to the profound ripple effect a few malcontents can have on the rest of the squad. You couldn’t have a better example of that than at Old Trafford. By contrast, Arsenal, who United will play next, have gradually begun to realize the benefits of these releases. It has value far beyond the transfer fee.

This is the situation in which any manager should find themselves. This is something that individual managers can also help enforce, if they have the necessary charisma and vision. That’s what Jurgen Klopp did at Liverpool, beaming with the attention that brought together so many different parts of their training structure in 2015. Pep Guardiola was probably on the other side, entering a club fully formed in City, which is what Ten Hag was used to on a lower scale than Ajax.

The big question is whether the Dutch coach can help bring that to United.

Because, elementary as it may seem, there is so much missing at Old Trafford. And even now, after so many candid encounters with Rangnick, there is a big difference between knowing the path and following it.

Perhaps that’s where Glazer’s ownership is a bigger problem than even those huge interest payments. While United still have so much revenue they can weather the effect of all that cash flowing out, getting around their corporate structure is much more difficult.

Everything has to go through Joel Glazer. “He makes all the big decisions,” is a repeated line from those who have worked at and with the club. This process applies to so many things, from executive meetings to business calls.

For example, fitness equipment companies recently put out a tender for the new gymnasium in Carrington. There was frustration, however, because “everything has to be sent to Florida, which means no one can sign anything. Even on something as small as this.

Figures who have worked with United believe it is impossible to detach this from the nature of the 2005 takeover, which made everything a hard-line business decision. It could be unavoidable. It just had the negative effect of ensuring that United weren’t as attractive commercially as they could be because they weren’t successful.

The process has ultimately meant that decisions about football are, at the very least, influenced by people whose primary expertise is not football. There were even murmurs of inquiry about the reaction online. Liverpool owners, on the other hand, quickly realized that the best business practice was to trust the best people.

Whether United have the best people in football is another matter. There is now significant public pressure on John Murtough and Darren Fletcher.

So far, they haven’t blown away rival club peers. It doesn’t have to be a mark against their careers, and they could become prominent figures in European football. It’s just that that’s precisely the problem. A senior job at United, like with Ole Gunnar Solskjaer, shouldn’t be finishing school.

The sporting directors of these clubs must have years of experience at the top of the game. United simply do not have such an individual in their infrastructure.

Paul Mitchell, now of Monaco and formerly of Leipzig and Tottenham Hotspur, has spoken to United about a role. However, he would like full control over recruitment, which may not fit the current structure.

Disruption is expected in this area, of course, as signaled by the departures of Jim Lawlor and Marcel Bout. United need to significantly hone from a system that has seen them boast widely of how Aaron Wan-Bissaka became the right-back who signed an initial database of over 800 names.

This is where the ability to “contextualize how well a drive is working in your system” is key. Given that Wan-Bissaka’s specific strength in close range challenges doesn’t suit the role he’s been used in, the 24-year-old could serve as the personification of the problem. More indicative, however, is Jadon Sancho. He was a glamorous young English name United had been chasing for some time, due to Borussia Dortmund’s superb form built by making dart runs from starting positions near the touchline. Sancho was often devastating. So what did Solskjaer do with him? The Norwegian tried to play Sancho almost exclusively with overlapping full-backs in a narrow role. It should come as no surprise that there was such a disconnect for the winger, as his signature simply betrays rambling thinking.

You can cycle through the squad, but the bigger point is that so many players perform below themselves because they’re not being used to a unifying idea. This is how other problems, such as loss of confidence and increased unrest, begin to escalate. This is how a group can develop bad habits and why you start to need a cleanse.

So many coaches and staff over the past few years have found a “much tougher locker room” than they anticipated.

A fair consideration here is that any player can look completely different under a new manager, when played in the right role. Just look at Matt Doherty of Spurs under Antonio Conte, or Victor Moses at Chelsea before him.

One certainty about Ten Hag is that he is an excellent training ground coach, with a proven record of improving players. He is also a first for many in this Manchester United squad, in that he is a manager who works to the most forward-thinking principles.

That probably hasn’t been the case with any of their permanent managers since Sir Alex Ferguson. Meanwhile, Rangnick lacked the authority that comes with being a permanent manager, but also found he didn’t have a team used to the principles of what he describes as a ” ball-oriented pressing”.

This is something Ten Hag will also have to do. This is one of the reasons why he told the club it could take up to five years.

It might be faster. It is possible that a good basic framework and a more focused group will do a lot of good. United will surely return to more competitive levels, and at least to a situation where they qualify for the Champions League with relative ease. That should be the bare minimum at such a club.

But at City and Liverpool levels, where absolutely everything is going in the same direction, and it’s all the way to the top? This is where United should be. It’s just going to take a lot more than a managerial meeting.