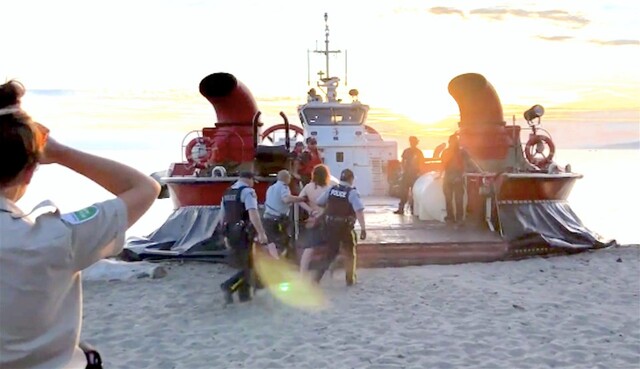 Vancouver’s Wreck Beach has become so busy that a spike in emergency calls to police, firefighters, paramedics and marine rescuers is prompting officials to take up a greater presence this summer.

Last year, 178 emergency calls for service at Wreck Beach were made to the RCMP (54), Vancouver Fire Rescue Service (48), BC Ambulance Service (41) and the Canadian Coast Guard (35), according to a report from Metro Vancouver , the regional government in charge of managing the park.

Park rangers report visits to Wreck Beach, located west of the University of BC, have grown at an annual rate of 11% since 2010. In 2021, a record 700,000-plus people were estimated to have visited the park.

Rangers are now contemplating a suite of changes to the park, including a new annual log and debris removal program to deter beach fires and more patrols to support police monitoring.

This summer, beachgoers can expect more “education” from rangers on basic rules such as prohibitions on fires, alcohol consumption, camping and loud amplified music.

Where education — including new signage — fails, park rangers are preparing to issue violation tickets to repeat offenders, the report claims.

The authorities have struck a committee to address the rise in emergencies, which poses a particular challenge to rescuers because the beach is isolated at the bottom of a steep hill, only accessible by an over-500 step staircase.

As a result, the Coast Guard’s hovercraft is often deployed to the beach to extract injured people. The Coast Guard visited Wreck Beach in 2021 35 times, nearly as many times as it did between 2018 and 2020 (41).

In preparation for the summer, staff are also making repairs to trail surfaces, wooden steps, railings, fencing and signage

The beach is a portion of a seven-kilometre shoreline along Point Grey. It was deemed clothing optional in 1983 by the provincial government.

The agencies are said to have met with user groups and members of Musqueam First Nation to form a vision statement that acknowledges the park’s distinct subculture.

“Wreck Beach has a beach culture that is unique and vibrant but also safe, welcoming, and inclusive to all regional residents and visitors,” notes the Metro Vancouver staff report to the regional parks committee on April 13.

Along with safety upgrades, the Musqueam will be contributing to a signage program highlighting the area’s Indigenous history.