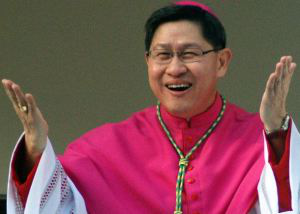 On Saturday, Cardinal Luis Antonio Tagle delivered a speech at the Lambeth Conference taking place at the University of Kent.

Speaking at a meeting on the theme: ‘The Church of God for God’s World – Walk, Listen and Witness Together’, convened by the Archbishop of Canterbury, Justin Welby, Cardinal Tagle, who was pro -Prefect of the Evangelization Section of the Dicastery for Evangelization in the Vatican since June of this year, offered his own reflections with a speech titled: “The Church of 1 Peter for the coming decade”.

Cardinal Tagle began by imagining that St. Peter’s letter was addressed to us, to the Church and to the world we know today. The Letter encourages Christians to remain faithful in their beliefs and conduct, and to be of one mind, loving, compassionate and humble, despite the risk of persecution and suffering.

He observed that the Letter is addressed to Christians in the Diaspora who have felt like foreigners or exiles.

He asked if we can still feel this reality today as we move towards a future homeland, especially since we can be so determined in our ways of being and doing, as we are called to be a Church that reaches out to others, a Church that is a spiritual home with peoples of diverse origins and cultures through its encounters. This vocation recalls today’s displaced people, Cardinal Tagle continued, forced migrants, refugees, victims of war, human trafficking and forced labor.

They are the new, often marginalized strangers among us, scapegoats for today’s problems, he observed. The Letter asks all of us, especially as members of the Church, how we treat these millions of “homeless people” and whether we show the compassion and hospitality that are part of the Christian vocation.

Cardinal Tagle lamented that even within the Church we have allowed ethnic and cultural divisions to ruin our spiritual home, making the dream of a common human family increasingly elusive for future generations due to our neglect. and our succumb to violence and war.

Populism has also played a role in this reality, he admitted, because it actually shows a disregard for people by deepening polarization in already divided societies, categorizing entire peoples, groups and societies, especially on social media. He stressed that we must not allow culture or religion to be used for partisan interests that undermine efforts to foster positive relationships and create a human family marked by respect and brotherhood.

The invitation to walk and live together requires humility, Cardinal Tagle stressed, and our diversity comes from our culture of origin and not just from individual freedom and choice.

Therefore, the pastoral leadership of the Church must better develop its own “cultural intelligence”, reflecting first on our own origins, and then putting ourselves in the place of others who express their humanity according to their own cultural origins. .

This, he explained, can help us eliminate all traces of cultural superiority and prejudice, when discovered and rightly acknowledged. We can learn a lot from each other by humbly observing each other and learning to appreciate other experiences and cultures that make us who we are.

Reading the Gospels, we have many accounts of how much Jesus suffered for his openness and compassion for strangers, strangers and public sinners, Cardinal Tagle added, leading to the condemnation and crucifixion of Jesus.

In conclusion, Cardinal Tagle recounted some of his own experiences that remind him of the Letter from 1 Peter, saying that they brought to life a dream for the future here in the present.

In one anecdote, he recalls visiting a refugee camp in Greece where he met so many people who risked their lives fleeing suffering at home. The camp brought together people from every imaginable culture, religion, economic and social background, but united in their journey from despair to safety and the search for a better future for their children.

He spoke with a city government official during his stay and discovered that she was not there in an official capacity, but rather was volunteering her time at the camp. She told him, “My ancestors were refugees too. I have refugee DNA. These refugees are my brothers and sisters.

It marked him deeply and marked a teaching moment on how to think and walk humbly with others and let God through us build a common home, marked by compassion and brotherhood.