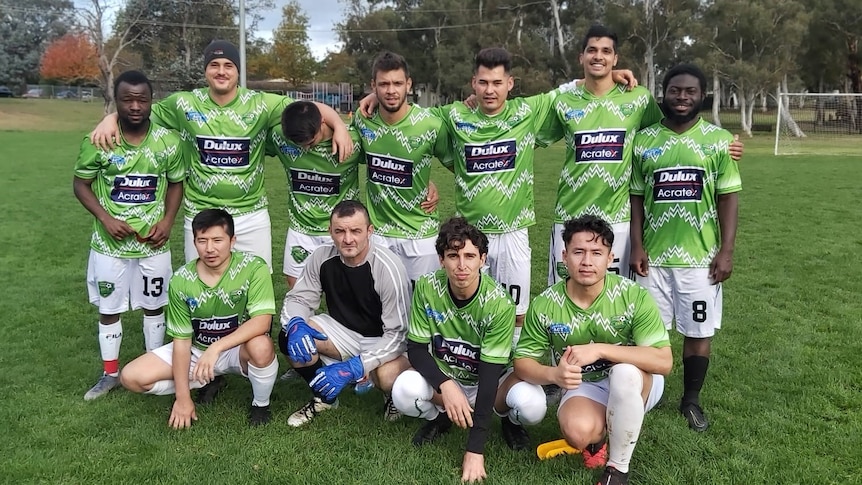 But its grounds are home to a football club which, for some new Canberrans, plays a far bigger role than sport in most lives.

The Canberra Kangaroos were founded nine years ago by a group of Afghan refugees. He entered the annual refugee tournaments held across Australia.

But this year, it became mainstream. For the first time, the club competes in Canberra State League competitions.

Its secretary, Ali Ekhtyari, said that while the Afghan community had created the club, it now had players from Pakistan, Brazil, South Sudan, Iraq and Iran.

“This club is based on inclusion, to avoid the isolation that refugees and migrants often face,” he said.

“It’s really useful for these migrants who don’t know what to do, how to get out of isolation, loneliness.

“It’s a good place to be with each other.”

Some of the club’s players face tough challenges outside of football.

Goalkeeper Rohullah Hassani has a temporary visa and is fighting to bring his family to Australia.

“We’ve been separated from our family for a long time, a decade now,” he said.

“It’s very hard. Every day it’s depressing and we’re worried… back home it’s not very safe, mentally we have a lot of stress.

“We just hope [the] new government to give us a chance to bring our family and start a life here. »

However, Mr Hassani said finding a welcoming community in Australia eased his situation.

“I’m proud and I feel a lot better since I joined this club,” he said.

“It was difficult at first, I’m not going to lie,” he said.

“A lot of the boys came here about a year ago, and some of them have been here a little longer,” he said.

“[Seeing] the guys who have been there a bit longer…bring the other boys in and show them the way, that’s what has brought the team together the most.

“We all understand that football is a universal language and it’s been really good to bring the boys together and understand their stories, where they come from and how they’re able to transfer that to the pitch.”

One of the new players, Hekmat Frotan, moved to Australia last year.

“It’s more than a football game for me – I came, I met new people, I made new friends, I made a new family actually, which is great.”