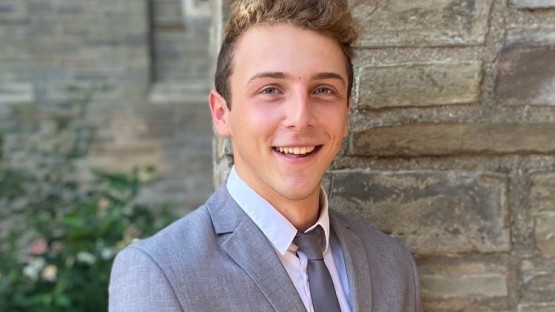 Bryce Demopoulos ’23 was on his way to his summer job at Weill Cornell Medicine on August 4 when he saw a man “half falling, half tripping” in the subway tracks and jumped to save him seconds before he an incoming train enters the station.

“I haven’t really given it too much thought,” said Demopoulos, a specialist in biological and environmental engineering at the College of Agriculture and Life Sciences. “I saw someone who was obviously in trouble and I was able to help them. It didn’t really occur to me that it was dangerous at the time – I just l I felt like I had a responsibility to step in and help him when he needed it.

It wasn’t until later, while watching video of the rescue published by New York University’s student newspaper, Washington Square News, that Demopoulos saw the headlights of the approaching train and realized how bad their escape had been. been narrow.

“I wouldn’t call it a near-death experience,” he said, “but it’s sobering. Hearing about the event doesn’t really do it justice. Crazy things happen.

Demopoulos works as a summer research intern in the Stem Cell Research Laboratory of Dr. Shahin Rafii ’82, Head of the Division of Regenerative Medicine, Director of the Ansary Stem Cell Institute and Arthur B. Belfer Professor of Genetic Medicine at Weill Cornell Medicine. On the morning of August 4, he was with a friend, NYU student Andre Dubovskiy, at the Third Avenue-138th Street station, waiting for the No. 6 train from downtown. Seconds after Dubovskiy pulled away to check when the next train would arrive, Demopoulos said, he heard the man scream as he fell onto the tracks.

“I thought he would be able to jump on his own, but he didn’t get up,” he said. “I pretty much jumped straight away. It all happened really fast – I realize how cliché that sounds, but it’s true.

The video, filmed by a Metropolitan Transportation Authority (MTA) employee, shows Demopoulos jumping onto the tracks, lifting the man up, putting an arm around his back and helping him up. He then reaches out a hand for the man to step on so he can get up on the platform. Demopoulos quickly followed, with the lights of the incoming train visible behind him.

Once on the platform, onlookers approached, including the MTA worker who filmed the video and other employees. The man thanked Demopoulos for saving him.

“I am still shocked at the decency, concern and sincere kindness that could lead someone to risk such danger to help someone else,” said the employee who took the video in Washington Square. News. “The danger isn’t just the oncoming train – it’s the big jump down, the third rail, the stranger who puts his arm around you.”

Demopoulos, who is currently applying to medical school, comes from a family of Cornellians, including her mother, Dr. Jacqueline Ehrlich ’89, MD ’93; his father, Dr. Byron Demopoulos, MD ’91, associate professor of clinical medicine at Weill Cornell Medicine; and his sister, Sage Demopoulos ’22, a student at the College of Veterinary Medicine.

“Looking back, I’ve never been in a situation like this before – that’s the kind of stuff you talk about in the papers,” Demopoulos said. “I’m glad my first reaction was to step up and do something.”