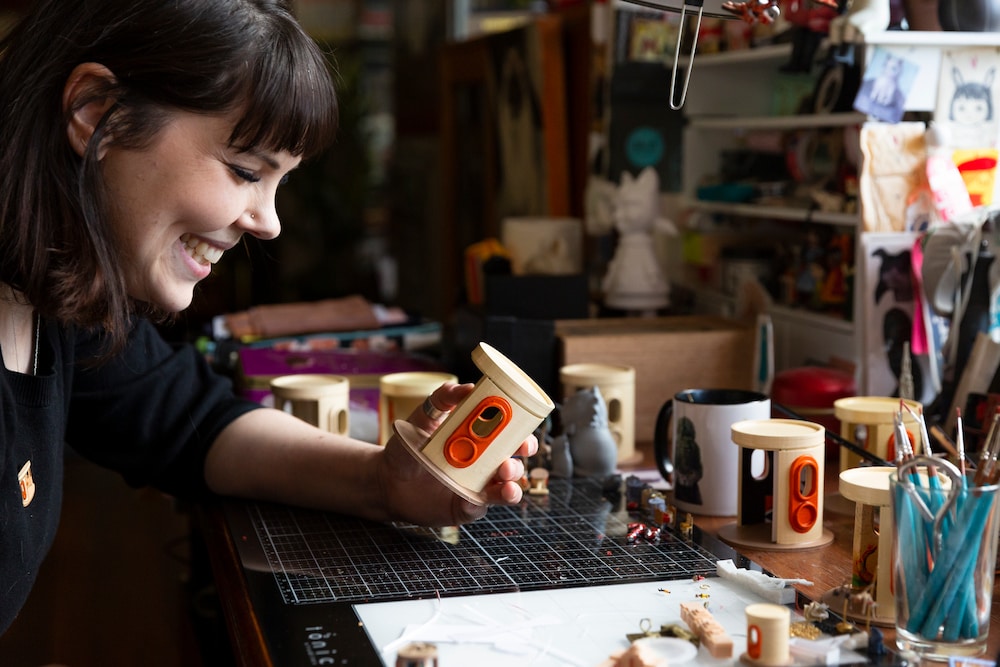 Scattered around a heritage 1920s home in Queanbeyan, brutalist bus stops and mini Black Mountain Towers can be found on almost every surface.

All painstakingly designed and handmade by Marisa Martin and David Tynan, the little figurines are a passion project to show their big love for Canberra.

Starting off at the local handmade markets, the duo has been creating iconic Canberra figurines for almost seven years.

Recently, after deciding to separate the Canberra-centric products from Suitcase Dollhousea creative business for handmade things, Ms Martin and Mr Tynan have officially introduced Burley & Brave to the world, with the popular products sold at POP Canberra and Splatter.

Both Ms Martin and Mr Tynan grew up in Aranda, admitting to spending “a lot of time” in the bus shelters as teenagers, where their love for the iconic Canberra structures began.

As the founder of Enemies of Reality Films and the Lights! Canberra! Stock! FilmFestivalMs Martin has always been involved in the local community.

Her work in film has garnered multiple awards, including a WOW Award for Best Australian Animation for her stop-motion animation Tegan the Vegan, and winner of Best Australian Short Animation for Della Mortika. She has also worked in the art department for the 2020 film, The Invisible Manstarring Elizabeth Moss.

Ms Martin says she has always been a creative person and first fell in love with tiny things when making the clay figures for Tegan the Vegan.

“What happened was I was making all my miniatures for my sets and I just discovered I really loved making little things,” she said.

Growing up with a father who is an architect, Ms Martin said it was no surprise she has an eye for the uniquely Canberra architecture that “doesn’t get enough love”.

While joking that she might love the National Capital a little too much, Ms Martin said the idea for the Canberra themed miniatures, matchboxes and jewelery sprang from Suitcase Dollhousea business that upcycles suitcases to turn them into dollhouses.

“We were already doing the doll house miniatures and the little matchboxes, so we thought why don’t we do Canberra buildings?” Ms Martin smiled.

As an avid collector of mini cities, she couldn’t shake the idea that Canberra needed its own memorabilia.

“You go to Paris and you can take the Eiffel Tower home with you,” she said. “We didn’t have that … I thought Canberra deserved to have the same.”

“There seemed to be a little bit of a gap in the market about Canberra as well,” added Mr Tynan.

With a degree in archeology and experience building things big and small, Mr Tynan helps Ms Martin to construct each miniature.

He also writes a snippet of Canberra’s history to be included with all Burley & Brave products to bring the capital’s history to life.

“They were going to be fancy with electric lighting and a sort of sky light above them as well but that was all killed by the NCDC when he presented the plans,” Mr Tynan said.

The duo admits they were a little surprised at the popularity of their products but have come to realize it’s nostalgia mixed with love for the Capital City that keeps bringing customers back.

“It’s a very convenient city to live in, a very pretty city but people don’t think of it that way and I think it’s nice to remind them … I also think it’s a nostalgia thing that people really remember.”

ace Burley & Brave continue to grow, their next task is to create dolls of Walter Burley Griffin and Marion Mahony Griffin to celebrate the couple’s contribution to the design of Canberra.

There are also bus shelter cookie cutters in the works for those craving home and something sweet.

“It is such a thing that links people to their memories of growing up here and they get sent all over the world,” Ms Martin said.

“We’re really lucky that people are interested in buying these things so we can make them.”