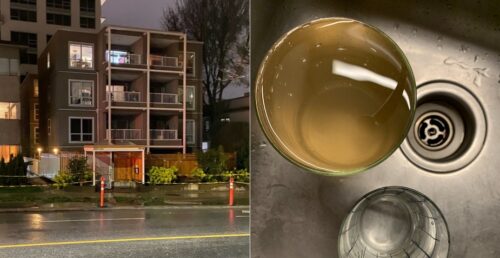 It came as quite a shock to residents of Vancouver’s Fairview neighborhood last night when brown water started pouring from their taps.

It happened after a private water main near Oak Street and 10th Avenue failed and “caused a large temporary spill of water through the pipe.”

Anyone else seeing brownish tap water in #Vancouver? pic.twitter.com/ZRRw8e4ofl

In an email to Daily Hive, the City of Vancouver said, “The City Emergency Crew shut down the pipe last night to allow for repairs to the private water line. The property at 985 West 10th Avenue will be without water until repairs are complete, after which the City will reactivate the water line. Repairs are the responsibility of the owner. »

Oak and 13th (with water from the fridge this morning) pic.twitter.com/NceK3PZnrs

On social media, some people also reported “brown” and “brownish” liquid coming from their faucets throughout the next day.

There was a topic last night with lots of pictures on it. Does anyone know if this is still happening. Our water was brown, and I work in construction and really need a shower when I’m home

“The large volume of water has stirred up sediment in the pipe system, a normal occurrence when excess volume passes through a water main,” the city’s email reads. “The sediments pose no health or safety risk.”

Hemlock and 12th too.

The property at 985 West 10th Avenue where the outage originally occurred will be without water until the City can reactivate it.

Are you noticing water quality issues in your neighborhood? You can report it to the City of Vancouver.