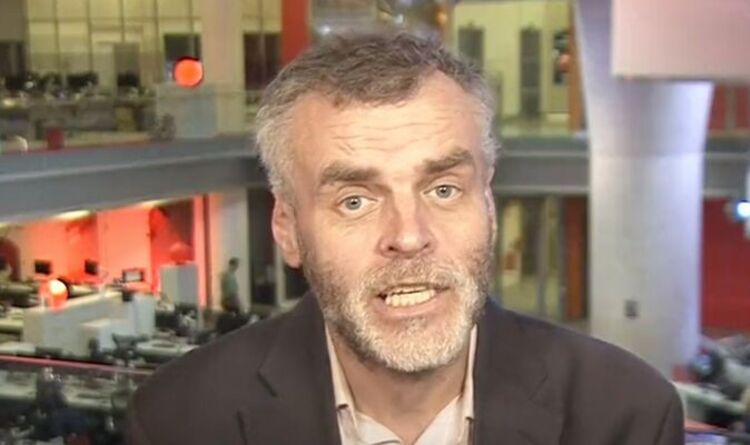 Boris Johnson has been branded “unbelievable now” by the Conservative Home founder Tim Montgomerie. The conservative pundit believes the Prime Minister but leave after Mr Johnson was hit with fines by the Metropolitan Police over a birthday bash held for him in Downing Street against lockdown rules.

Mr Montgomerie was told BBC Scotland: “You got a poll today as well, Tim suggesting that 57 percent think [Boris Johnson] should resign the same number think that the Chancellor should resign as well.”

He replied: “Absolutely, I think you know, if there are Tory activists and Tory MPs watching now, who aren’t persuaded by the sort of the moral case for the Prime Minister to go or the Chancellor to go, I think those stats should ring very loudly in their mind.

“The Prime Minister frankly is unbelievable. Now, in the eyes and the ears of many voters, and sooner rather than later”

The conservative commentator added: “I think the Prime Minister will have to go just to clear up the conservative party’s chances at the next election.”

The Prime Minister, his wife and the Chancellor all apologized on Tuesday and confirmed they had paid fines imposed by the Metropolitan Police over a party held on June 19 2020 to mark Mr Johnson’s 56th birthday.

Mr Johnson said it “did not occur” to him that the gathering might be breaching Covid rules, while Rishi Sunak said he understood that “for figures in public office, the rules must be applied stringently in order to maintain public confidence”.

But although both politicians said they now accepted the rules had been broken, neither appeared to be considering their positions, as they said they wanted to get on with the job.

Speaking to broadcasters at Checkers, Mr Johnson said: “There was a brief gathering in the Cabinet Room shortly after 2pm lasting for less than 10 minutes, during which people I work with kindly passed on their good wishes.

“And I have to say in all frankness at that time it did not occur to me that this might have been a breach of the rules.”

He added: “I now humbly accept that I was.

“But I think the best thing I can do now is, having settled the fine, is focus on the job in hand. That’s what I’m going to do.”