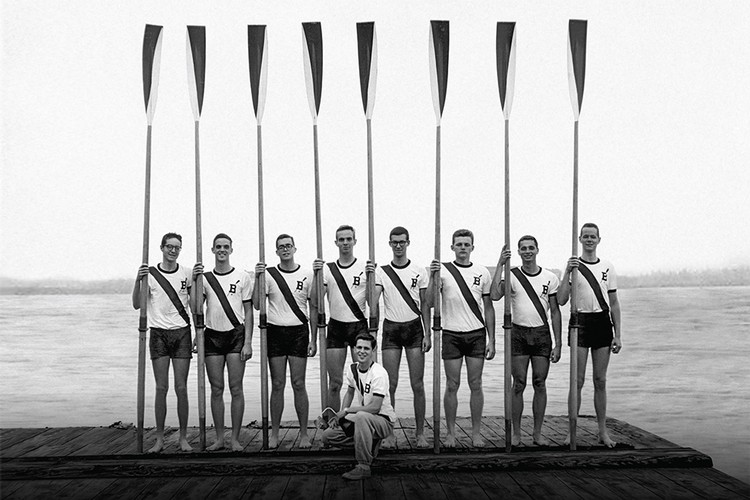 Did it ever occur to the people who arranged our stay in the Navy that maybe the Navy didn’t want us to become the US Olympic Crew?

Am I unfair to Coach Pratt, who did great things to get us going fast? Perhaps. My best race weight was 182, but for the first of our two tries I was 164, not to mention my back was disarticulated.

Worse still, Coach Pratt swapped Phil Makanna and me so that once in my four years I rowed in the two-seater – fatal! Coach Pratt may have had a flawed understanding of idiosyncrasy. As Charlie Butt realized, you can edit the Brown Cinderella Crew but not edit it.

Phil and me. Who thought we would make this book sixty years later?

Pratt’s theory was that our starboard side weighed ten pounds per man more than our port side and pulled us around. Which meant Mouse to go straight had to use a rudder that slowed us down.

Never mind that venerable Marietta College crew trainer Ralph Lindamood declared Mouse (Richard MacKenzie) to be the shrewdest, best-steering coxswain he had ever seen in his entire life. The mouse got a light touch on the rudder strings, that’s what I’m trying to say.

Since I was three inches taller than Phil, coach Pratt explained, I could put more length on my grip to lift the boat sideways, requiring less rudder.

In a nanosecond, famed retired Washington and Harvard coach and athletic director Tom Bolles discovered this finesse at the first annual Brown-Harvard race the following spring.

He was the man who taught Joe Rantz how to row in the UW crew book at the 1936 Olympics THE BOYS IN THE BOAT.

He came up to us from the Boston side of the Charles and said, “You might have won this race if you hadn’t been so long at the catch that you were pressing your gunwales together.”

Another change overseen by Coach Pratt was to replace the eight steel frames holding each oarlock called “riggers” on our new boat the Hunter with those corroded on the Stein.

We had rowed the Hunter a few times, but noticed a big change in the personality of the boat that we weren’t ready for – not with the upcoming Olympic trials.

Changing the corroded riggers seemed like a good move, but it wasn’t. Because the Hunter’s riggers were made for the Hunter and were a different size, so Bill Engeman couldn’t get the rig into the stratosphere anymore.

But it’s too easy to row to be paranoid. The famous nineteenth-century example of the principle of paranoia – “if you’re not paranoid, you don’t know what’s going on” – occurred in northern New England the day before a race for money between two single rowers. On race day, the lone rower emerged from where he had slept to find his boat sawn in half.

Likewise, some of us have heard a terrible rumor that when our new ship, the Hunter, first arrived in Boston after crossing the country from Seattle on a train loaded with Pocock cedar racing shells designated by the right coast, a rower from Massachusetts (we don’t know from which school) arrived at the boxcar before anyone else and changed some labels.

My paranoid thinking will persist throughout my life, no matter how I try to reason with it. Were we all our last year heavyweights in a lightweight shell sitting too low in the water? And that’s why we could only beat Yale but not the other crews in the 1961 Eastern Sprints final?

On the other hand, the Hunter was the boat used by the first female Title Nine varsity in Brown, coached by our teammate Peter Amram, and the women found it – the Hunter – too heavy for them.

So we’ll never know how bad or proper the Hunter boat was, but I can guess. We finished seventh in the 1961 Three Mile IRA, pinched by the Navy for sixth place by exactly the same margin as at the 1959 Eastern Sprints, two tenths of a second.

The 1960 Olympic Trials were a similar anti-climax for us. We led in our two races but lost and were beaten by crews we had beaten three weeks before.

The most notable aspect of this apart from our presence – thank you Mr. Avery Brundage, Head of the International Olympic Rowing Committee – was chatter in the other boat as Penn and Brown lined up before the start of our two-boat draft. for final disposal.

As a later crew trainer, I hate small talk which I believe is discussion between competitors right before a race. Why not let rowing do the talking instead? We or maybe just I had read a Sports Illustrated article about a duo race between Penn and Harvard earlier in the spring in which Penn pissed off Harvard simply by carrying on a supposedly civil conversation with them as the two boats floated side by side.

We anticipated this psyche job and got it and it was not pleasant. But how was Penn, who had done us great service in the past, able to reform himself from any bad behavior in a single season?

And then in the first modern Brown-Harvard race – between eight – we encountered the same phenomenon only at Harvard this time, as if to say, “That’s how it’s going to be, Brown. Welcome to the Big League. ”

I highly doubt either Tom Bolles, who as athletic director picked Harvey Love as his varsity coach, or Love himself told rowers to talk to us that way. Harvard’s athletic administration had decided to uplift Brown Crew, not crush it.

The hunter took the lead early, and the mouse shouted, “I’ve got the seven men, give me…”

And the Harvard coxswain, interrupting, turned his megaphone on us and remarked, “Like the hell you do.”

We weren’t destined to be the best crew in the land, but we could be the king of all the Dad Vail crews in the land. And as any Dad Vail Championship crew can tell you, race organizers will treat you like royalty with banquet food and drink and maybe a commemorative trophy with a Dad Vail pin even if fifty or sixty pass before you return.