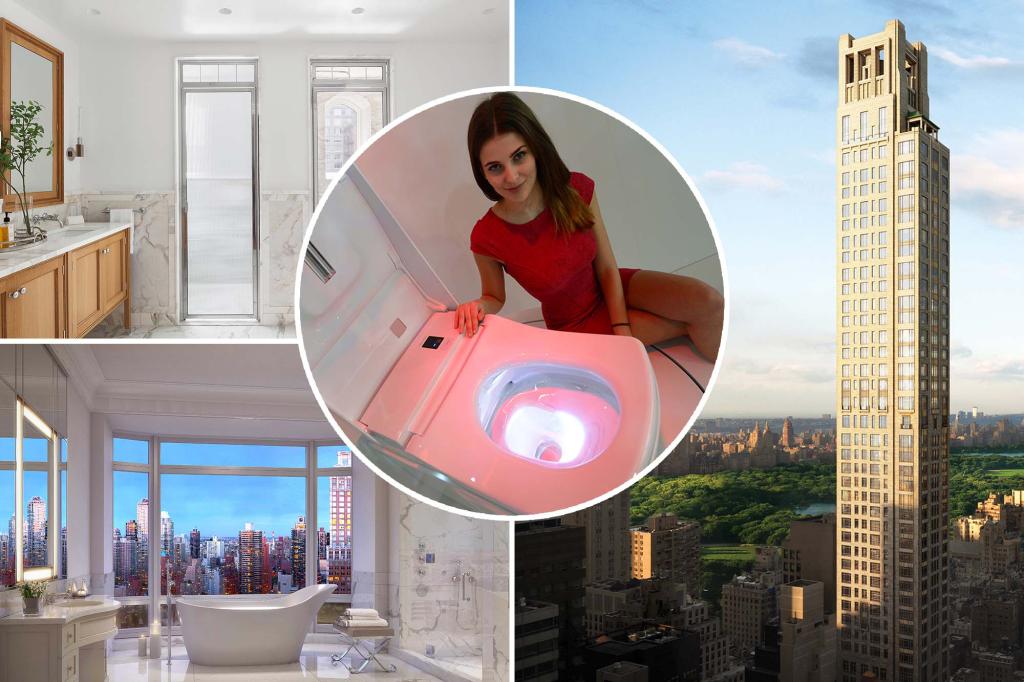 Tush, tush. It was bidets or bust.

Compass agent Vickey Barron was showing a couple two apartments in a new luxury Manhattan development recently; they planned to knock them together to create a huge home. The pair wouldn’t budget on one detail, though: In each of the six bathrooms, from powder to master, they insisted the developer install bidets before they moved in.

“If we hadn’t accommodated that, I’m not sure they would have moved forward,” she said, “It was a non-starter.”

Barron’s clients were originally from Turkey, and she says that foreign buyers like them, are often baffled at their absence in luxury New York homes.

“They say, ‘You gave me a refrigerator the size of a walk-in closet, but there’s no bidet?’ “she laughed. “But it’s so rare here. It goes back to what everyone is used to.”

Locals, at least historically, have pooh-poohed the piece of porcelain — but that is changing. Developments are popping up with these post-poop bonuses: the highest category of apartments at Robert AM Stern’s 520 Park Ave. features bidet in the master baths, and there are Toto bidet toilets in all primary baths at 555 West End Ave. Across the river, the Brooklyn Home Co.’s projects, like 488 Sterling Place and 137 4th Ave., have bidet-ready bathrooms.

Sales are soaring, at least according to Perry Hiiman of New York Kitchen & Bath. In 2020, they rose 400% year on year, and remain at record highs — no ifs, ands or butts.

Manufacturers continue to try to convert us: Market leader Toto, the Japanese firm which invented the combined bidet-toilet in 1980, just relaunched its line at CES in Las Vegas in January, touting the use of “e-water” — electrolyzed water that apparently is more sanitary and hygienic than Hudson River tap.

So what was the problem, and what’s changed? NYKB’s Perry Hiiman says the rump of the issue has always been cost. Installing a standalone bidet in a pre-war co-op building, for instance, often required laying new pipes all the way to the building risers to handle the extra water use; most models also require electricity, and so much of it that a dedicated line’s the only option.

The complex install needs more than just a plumber — contractors and electricians are vital, too. “When they realize all the cost, they just say no,” he says of most clients. Space is a question, too: Even in luxury condos, no inch is wasted, so better to big up the shower than squeeze in a bidet.

Another hitch, bidets never improved resale value — they didn’t boost the bottom line, as it were. “They don’t sell apartments,” shrugs Wendy J. Sarasohn of Brown Harris Stevens, who recalls that off-plan buyers at 220 Central Park South could pick between a bidet and a bigger closet. “Ninety-nine percent of the purchasers opted for the closet.”

Earlier in her career, she handled the sale of the same apartment in 45 E. 80th St., a luxury building from the 1980s where bathrooms featured bidets as a gimmick. “Each time, it was used to store magazines. The first owner was an interior designer, so it was Architectural Digest and so on, and the last was an actor, so she had People.”

Sarasohn remains unconvinced of their appeal. “I’ve never had someone call me up and ask, ‘I have to have an apartment that has a bidet’ — New Yorkers are always on the go, even at bath times,” she continues. Adding an extra step to ablutions, it seems, is just a pain in the butt.

Yet there’s clearly a newfound market in New York, and it’s in part thanks to technology. It’s now easy to have an all-in-one bidet and toilet — think those Toto washlets — so avoiding the extra construction costs Hiiman mentioned.

Attachments which can be added to existing cisterns made it cheaper, quicker and easier to trial a device like this; various versions are offered by companies like GenieBidet, Omigo and Tushy, the Warby Parker of washing your unmentionables.

“We believe in them to reduce toilet paper waste, so traditionally we’ve put an outlet behind all toilets,” he said, “It’s not an amenity that buyers really like to talk about openly on a walk-through of a new home. But we believe in bidets.”

Anyone who bought a property from Caleo, of course, was sitting pretty in spring 2020, when toilet paper shortages became the pandemic’s first pop-culture punchline. Such scarcity was what first spiked bidet sales at New York Kitchen & Bath, says owner Perry Hiiman; they’ve never come down, and he now regularly installs them, mostly Toto and Duravit models. “It was crazy all across the board,” Hiiman says, “Electrical bidet seats are the hottest thing in the market right now.”

It isn’t just New York’s wealthiest who’ve swapped wiping for washing, either. Sotheby’s agent Carolina Buia Barefoot in Jupiter, Fla., says that bidets are becoming the hottest bathroom amenity there; she often works with developer Dan Reedy, of Onshore Construction, who built homes for Kid Rock, Celine Dion and others. Now, he incorporates hybrid bidet-toilets in at least 50% of his new builds.

“Younger buyers aren’t only open to one — they want a bidet, particularly the combination ones,” Buia Barefoot said, noting that she’s renovating her own home and has added bidets to three of the six bathrooms.

Carolina was raised between Italy and Venezuela, so she has a different perspective on bidets by nature, of course. But she points out that life is slower in SoFla, of course, and home footprints larger, avoiding most of New York’s hurdles around installing them.

“Americans are so big on clean breath — you can buy sprays, mouthwash and Listerine strips,” she laughed. “Frankly, I like my other cheeks clean, too. You wash dishes before you put them away, so I want the dishwasher treatment.”