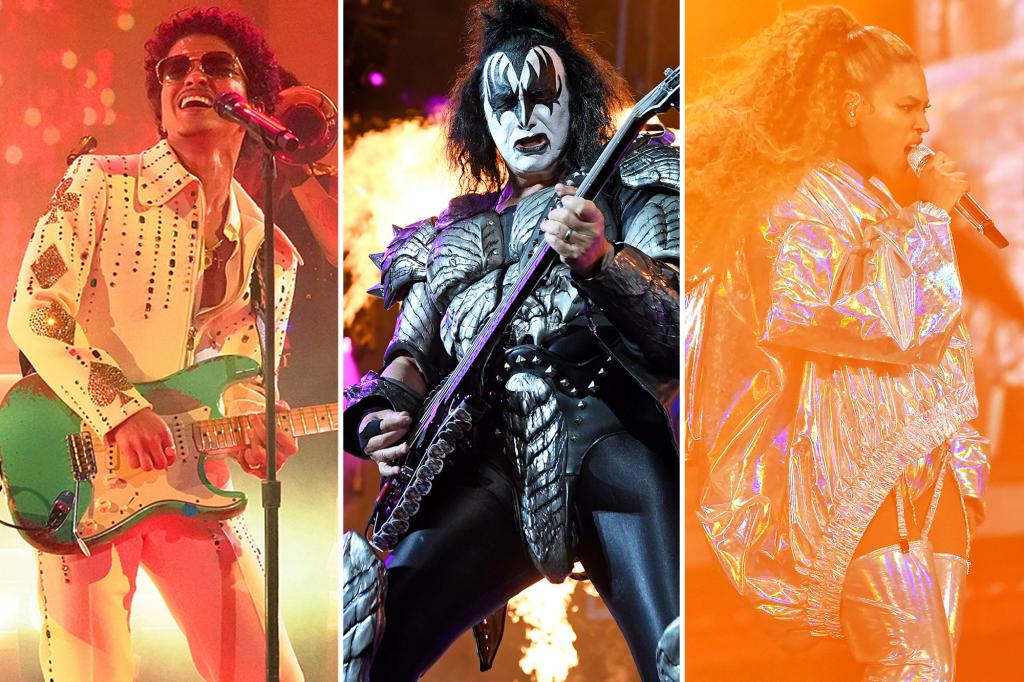 Gene Simmons is not in the habit of kissing anyone’s behind — even if they’re global superstars.

The legendary Kiss frontman, 72, has some choice words for A-listers such as Bruno Mars and Beyoncé, among others.

“You got to understand. We love [Mick] Jagger and Bruno Mars and Bono and anybody else. They’re all great. But if you put those guys — Beyoncé. Put Beyoncé in my outfit, with 7- to 8-inch platform heels, dragon boots that each weigh as much as a bowling ball … The entire outfit, studs, leather and armor is about 40 pounds,” Simmons told “Entertainment Tonight.“

The infamously long-tongued father of two adult children added, “The guitar and the studs is 12 pounds by itself. Then, you got to spit fire, fly through the air and do that for two hours. They would pass out within a half-hour.”

The devilish rock icon went on to say that Kiss is the “hardest working band out there and [we] take pride in it.”

The rock group was formed in 1973, and Simmons discussed how he and his current bandmates — co-founding member Paul Stanley, and replacement players Eric Singer and Tommy Thayer — have kept their stamina and endurance for performing after almost 50 years in the spotlight.

“We work hard at it,” the Israel-born bassist said. “No drugs, no booze, no smoking. None of that stupid rock ‘n’ roll stuff. I hike almost every single day with [wife] Shannon [Tweed]. We do 3 to 5 miles a day. It’s hard to keep this going.”

The foursome’s End of the Road world farewell tour is currently ongoing, and Simmons revealed why they decided to pack it up soon.

“The last thing that you want to do is be a guy that stays in the ring too long and gets his ass beat,” he said. “Get out of the ring when you’re a champion.”

Simmons also suggested that today’s singers should not get too comfortable as touring artists. “You’ve got to have some pride and not stay too long. Always keep them wanting,” he noted.

“I’m the most blessed and grateful guy in the world to be able to be in a band where I can wear more makeup and higher heels than your girlfriend,” Simmons then declared.