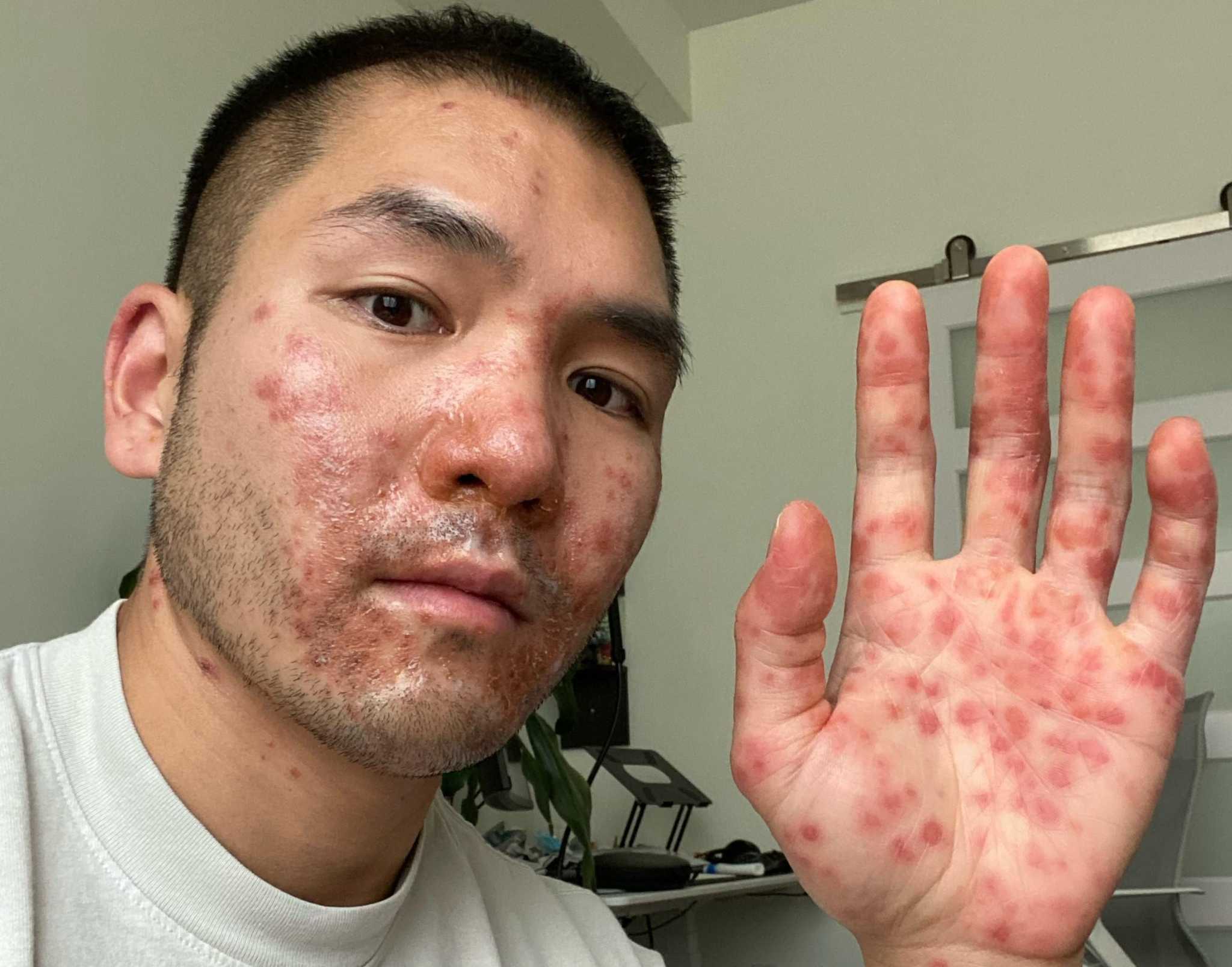 Two days after Kevin Kwong flew back to California from New York, his hands were so itchy the pain jolted him from sleep. He thought the problem was eczema.

“Everything started to escalate quickly,” the Emeryville resident said. “I started getting more pimples, on my face, more redness and they started leaking. The rash spread to my elbows, hands and ankles.

It took Kwong, 33, six virtual appointments with doctors and nurses, a call to a nursing hotline, a trip to an urgent care clinic, two emergency room visits and two incorrect diagnoses before an infectious disease specialist diagnosed him with monkeypox in early July. .

As the number of monkeypox cases has skyrocketed in the United States over the past month, the public health system is struggling to raise awareness of the danger of the virus and distribute a limited amount of vaccines to vulnerable people. But the problem goes even further. Those at risk of infection struggle with dead ends, delays, incorrect diagnoses and inappropriate treatments as they navigate an unprepared and ill-informed health care system.

The once-obscure virus is racing hospitals to teach ER staff how to identify and test it properly. Dr. Peter Chin-Hong, an infectious disease specialist at UC San Francisco who eventually diagnosed Kwong, said his case was a tipping point for the research hospital.

“Kevin arrived in the middle of the night when a lot of resources were unavailable. So I think after his case, we do a lot more education on the general condition. But I think your average clinician doesn’t always know what to do,” Chin-Hong said.

Monkeypox is caused by a virus in the same family as smallpox, although it is not as transmissible or deadly. Typically, patients have fever, muscle aches, and then a rash on the face, mouth, hands, and possibly the genitals that can last for several weeks.

The current epidemic is spread through human-to-human contact, such as touching a lesion or exchanging saliva or other bodily fluids. People can also become infected by touching objects or surfaces, such as sex toys or bedding, shared with someone who has the disease.

The first US case of monkeypox from this outbreak was reported on May 17, and since then the number has grown to more than 6,300 probable or confirmed cases representing nearly every state, as well as Washington, DC and Puerto Rico.

California Governor Gavin Newsom declared a state of emergency on Monday to coordinate the response and bolster the state’s vaccination efforts. About half of California’s 1,135 monkeypox cases have been centered in the San Francisco Bay Area.

Although anyone can be infected, the outbreak appears to have largely affected men who have sex with men. Kwong said he likely contracted monkeypox during a sexual encounter at New York Pride events.

“This is the first-ever multicontinental outbreak, so it’s not just going to go away,” said Andrew Noymer, an associate professor at UC Irvine who studies infectious diseases.

“It’s not going to explode like COVID, but this outbreak is going to have legs,” he said. “Maybe it’s like syphilis and it’s going to be like that.”

But most doctors don’t know how to recognize it. In late June, when Kwong began experiencing symptoms, most of the doctors and nurses he spoke with during virtual visits didn’t even mention monkeypox. This comes as no surprise to Dr. Timothy Brewer, professor of medicine and epidemiology at UCLA.

“Even though I’ve worked in several sub-Saharan African countries from time to time over the past 25 years, I’ve actually never treated a case of monkeypox,” Brewer said. “Before this current outbreak, monkeypox was a very unusual disease.”

A rash limited to the genital or rectal area can be mistaken for a sexually transmitted infection. But even if doctors haven’t been trained to recognize monkeypox, Brewer said, their advice to patients could help contain the spread.

“You would advise people not to engage in sexual activity until their lesions are healed and treated,” Brewer said.

Although many cases are mild and resolve on their own, some quickly turn serious, like Kwong’s.

“Your body is taken over by this thing that you don’t understand. And you have nowhere to go, so it’s both painful and terrifying,” Kwong said.

Kwong first treated the rash with the topical steroids he uses for eczema. When that didn’t work, he attended an online appointment with a nurse who diagnosed him with herpes and prescribed him antiviral medication.

Over the next few hours, the rash quickly spread to more of her body. Alarmed, Kwong went to an urgent care clinic. The doctor accepted the diagnosis of herpes and added another: scabies, a rash caused by mites that burrow into the skin. “My spots were concentrated on my hands, wrists, feet and elbows, which are prime locations for scabies,” Kwong said.

The emergency care doctor had considered monkeypox, but Kwong’s spots were clustered together and looked different from the pictures of monkeypox rashes the doctor had seen. “Depending on where I was with my symptoms and who I was talking to, I was getting different responses,” Kwong said.

Over the July 4 holiday weekend, Kwong frantically contacted anyone he thought he could help as his symptoms worsened.

“I tried to contact doctors, I knew friends of friends who were dermatologists,” he said. “After every time I spoke with someone, I quickly got worse. And that was really freaking out.”

During another virtual appointment, in the middle of the night, a nurse noticed that the rash had spread to her eyes and told her to go to the emergency room immediately. It was there, at Alta Bates Summit Medical Center in Oakland, that doctors said Kwong might have monkeypox.

“They were doing research while I was in that room and going back and forth on the phone with the CDC. As a patient, I expected to be in the dark, but I didn’t realize how uninformed providers were and how unprepared they were,” he said.

He spent 12 hours in the emergency room, where nurses took his lesions for a monkeypox test. They told him to come back if he got a fever or started vomiting.

“At this point, I was just miserable. I had sores in the back of my throat, in my mouth, all over my body,” he said. “I was just delirious because I couldn’t sleep for more than an hour or two at a time.”

Later that night, Kwong decided to go to UCSF Medical Center. He had heard from a friend that UCSF Health was treating cases of monkeypox, and a virtual care nurse had urged him to go.

Upon arrival, he was separated from other patients, given oxycodone for pain, and taken for another monkeypox test.

The next day, Chin-Hong began treating Kwong for monkeypox. “I thought, wow, this is a really, really extensive disease,” Chin-Hong said. “I have seen other cases of monkeypox before, but they are very limited. I would say Kevin is probably in the top 5% of disease severity.

Because the rash was close to Kwong’s eyes, Chin-Hong feared he would go blind if the disease was left untreated. He prescribed Tecovirimat, a TPOXX brand antiviral drug, which has received special FDA clearance to treat monkeypox in certain circumstances.

After the first day of taking the drug, Kwong noticed that her rash had stopped spreading. Over the next two days, the hundreds of swollen spots flattened into red discs. “I was shocked at how quickly Kevin improved. It was almost like he was a turbo rocket on his way to recovery,” Chin-Hong said.

As Kwong began to heal, he got his first test result: negative. Then the second: negative.

Chin-Hong said health workers may not have rubbed his lesions hard enough to get live cells for the monkeypox test. “For a clinician, it is very difficult to obtain a good sample in this type of lesion because the patient is often in pain. And you don’t like to see people suffer,” Chin-Hong said.

Cases like Kwong’s can be missed if the tests are not done properly. The Centers for Disease Control and Prevention’s online resource for clinicians is adequate, Brewer said, but only if you take the time to read all 59 pages.

Clinicians should take at least two samples from multiple locations on the patient’s body, he said. The key, Brewer said, is to sample lesions “at different stages of development” and not just focus on the early bumps.

For two weeks, Kwong took six antiviral pills a day to rid her body of the virus. He no longer needs painkillers. “My face was the first to heal, which I think helped me a lot, to be able to recognize who I was in the mirror again,” Kwong said.

Now, more than a month into the ordeal, Kwong’s hands and feet are finally healing. His cuticles and the skin on his hands have peeled off and are growing back, while his fingernails have turned black and started falling off, he said.

Kwong said the psychological toll will take longer to overcome. “I feel less invulnerable, because it was such a rapidly debilitating disease. And so I always work more on my mental state than on my physical state.