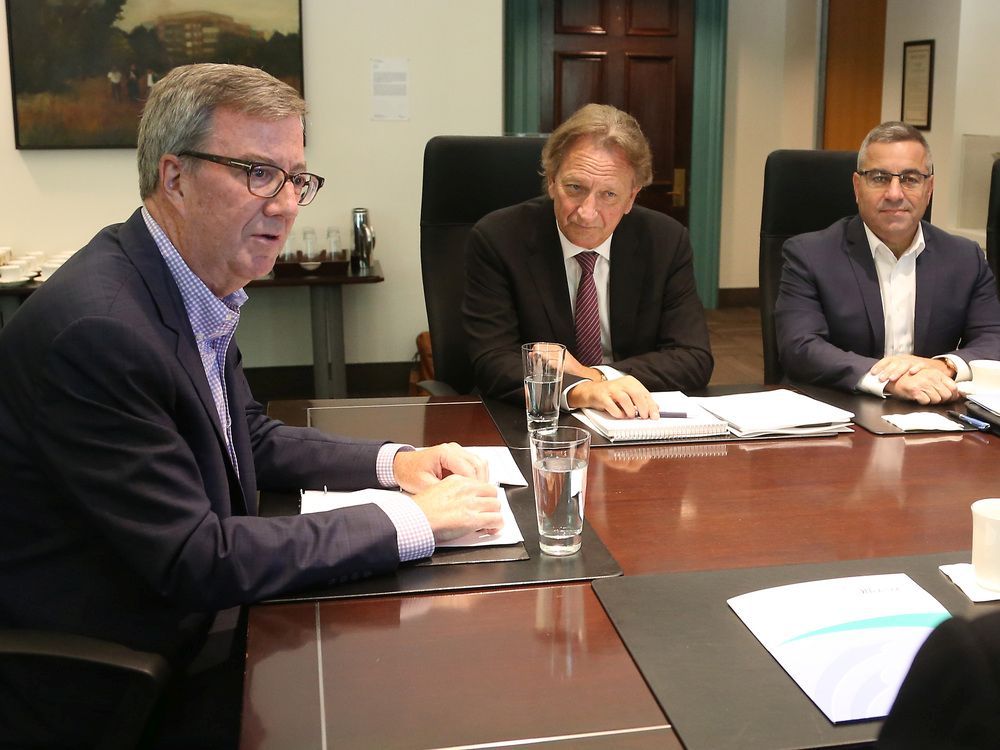 Eugene Melnyk and Jim Watson had a turbulent relationship, but on Tuesday the mayor wasn’t harping on their disagreements, choosing instead to highlight the contributions the late Ottawa Senators owner made to the city.

“I look back to what we were able to work with Eugene on. We went out to Calgary together to pitch (hosting) the World Junior (hockey) championships, which we won that bid. We got the all-star game. We got the outdoor classic,” Watson said in an interview.

“And the philanthropic work that he did touched the city. We worked with him and the Sens Foundation to build community rinks in low-income neighborhoods and we started off with the Rink of Dreams at city hall, which has been a huge success.”

Watson didn’t play down the city’s rocky relationship with Melnyk, who died on Monday at the age of 62, but the mayor acknowledged that the Senators organization under Melnyk’s ownership has been a critical economic anchor and social contributor in the city.

“We agreed on some things, we disagreed on other things, and I think he respected the fact that I was up front with him,” Watson said, estimating that he met with Melnyk a dozen times over the years, “and they were always friendly meetings.”

However, it was obvious that Melnyk grew frustrated with city hall as he pursued projects that could have expanded his company’s influence in sports and entertainment, while also creating new revenue opportunities for the Senators.

He wanted to bring a Major League Soccer (MLS) franchise to Ottawa and build a professional soccer complex near his Kanata arena. His pitch was up against Lansdowne Live and a consortium of businessmen eager to bring a Canadian Football League franchise back to Ottawa in a larger redevelopment of Lansdowne Park.

The city could only back one sports project and the majority of council in 2009 voted to negotiate with Lansdowne Live, leaving Melnyk on the sidelines.

Then in 2013, as the Ontario Lottery and Gaming Corp. looked to create gambling zones across the province, Melnyk saw an opportunity to build a casino in a larger development around the Canadian Tire Centre. While revealing the hockey club was losing $10 million annually, Melnyk said a gambling operation could help generate money for the Senators and produce a more competitive team as the NHL salary cap increased.

Instead, the majority of council voted to keep all provincially sanctioned gambling operations at the Rideau Carleton Raceway in support of the horse racing business and rural economy.

That made Melnyk furious with city hall. He went on a verbal offensive against Watson and the city, while suggesting that the hockey club would need to find a “Plan C” to find more revenue.

Soon after, the National Capital Commission launched another attempt to redevelop LeBreton Flats.

The LeBreton Flats project could have been another Melnyk initiative stymied by local government, completing a hat trick of disappointments. But, his RendezVous LeBreton consortium won the approval of the NCC.

Of course, Ottawa residents know too well how the story ended. Melnyk and his consortium partner John Ruddy of Trinity Developments had a falling out, ending a plan that would have centered an NHL-caliber arena in a new mixed-use community.

At the time, Watson revealed that the Senators wanted property taxpayers to fund construction of an arena, though the hockey club said those talks were “strictly exploratory.” For the mayor, it was out of the question for city hall to pay for an arena, but he supported the Senators’ move downtown.

On Tuesday, Watson said he was disappointed that the RendezVous plan collapsed since it was a once-in-a-generation opportunity to build at LeBreton while helping Melnyk’s hockey club.

The mayor said it means a lot to people when Senators players or Spartacat, the team’s mascot, show up at community get-togethers, including Melnyk’s Skate for Kids, an event Watson described as “magical.”

“Those kinds of things tend to get overshadowed when there’s a big public disagreement, like LeBreton or the casino, but at the end of the day, I think he did a lot of good,” Watson said.

The Canadian Tire Center is in Stittsville ward, whose councilor is a former employee of Melnyk’s.

Glen Gower worked for the club between 2005 and 2013 in the marketing department working on game-day productions, including the videos, music and promotions.

“Mr. Melnyk had a keen interest in all those aspects,” Gower said.

Gower stressed the importance of the Senators to the Stittsville and Kanata communities, which had feared Melnyk moving the club to downtown.

“When you think about some of the greatest moments of the Sens in the last two decades, we had Stanley Cup finals here, we had the draft, we had the all-star game, we had the World Juniors,” Gower said.

“Love him or hate him, he was instrumental and these were all important events and things he wanted to bring to the City of Ottawa. I think you have to give him credit for that.”