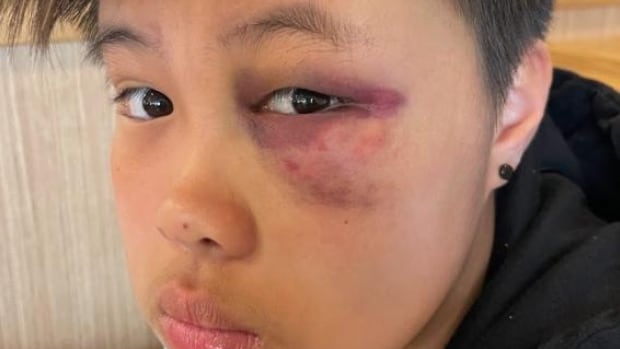 Janice Xie, 14, says she was attacked and beaten unconscious in a school hallway by a 17-year-old student who left her with head injuries and fearful to return to her school high school in Richmond, British Columbia.

The Year 9 student from Hugh Boyd Secondary says her attacker hit and insulted her, using racist and homophobic slurs, under the mistaken impression that she had made comments about another girl who liked her.

Xie told CBC the boy ran up to her as she was going down the stairs for lunch and punched her last Thursday.

Xie’s parents described being stunned by the violent incident inside the Richmond school.

The teenager’s father, Tim Sorensen, said no student should have to face threats or fear at school.

“We are definitely freaked out.”

The teenager’s father said he was told other students should keep the attacker away from his daughter who was kicked and punched in the face as she lay on the floor.

“It was out of the blue. She didn’t really know him at all.”

Jordana Sorensen was first alerted to the attack by a call from her youngest child and text messages from Xie’s friend. She was horrified to learn that her child had fainted…twice.

Sorensen said she ran to school after learning that an 11th grade boy had kicked and punched Xie in the school hallway.

“I couldn’t believe it. I always thought school was safe for kids – that’s why I let her go,” Sorensen said, pushing back her sobs.

She says her daughter chose high school to stay with her good friends, despite being outside her catchment area.

“I am sure that all parents who have children [wouldn’t] want this to happen.”

RCMP are investigating the incident and met the family at the hospital, taking a statement as the 14-year-old girl was treated for her injuries, still suffering from dizziness and the effects of a concussion.

Tim Sorensen said police told him the young man would be formally charged with assault.

Richmond RCMP Cpl. Ian Henderson released a statement saying the 17-year-old man involved was arrested and handed over to a legal guardian at the scene.

“Due to confidentiality issues and limitations of the Youth Criminal Justice Act, Richmond RCMP cannot release further details or the names of those involved,” Henderson said.

“We recognize that these types of incidents can have a detrimental effect on an entire school community.

In an email, David Sadler, director of communications for the Richmond School District, told CBC that the school board recognizes its obligation to provide a “positive climate and a safe and healthy environment.”

All members of the school community must conduct themselves in an “ethical and legal manner that demonstrates respect” for others.

Teenager’s friends help with back to school

The district confirmed Richmond RCMP were investigating and said in an email that “further conversations between parents and school administration have taken place” and will continue.

Four days after the incident, Xie said she was afraid to return to class.

But the teenager said she was helped by supportive friends and school counselors.

“Even though I was afraid to go home, my friends made me feel better,” Xie said. “Everyone was texting me…they all comforted me and told me I could stay with you all day if you wanted and [they’ll] walk me to class and they’ll stay right by my side.”

CBC has contacted the school district and BC’s Minister of Education for further comment.