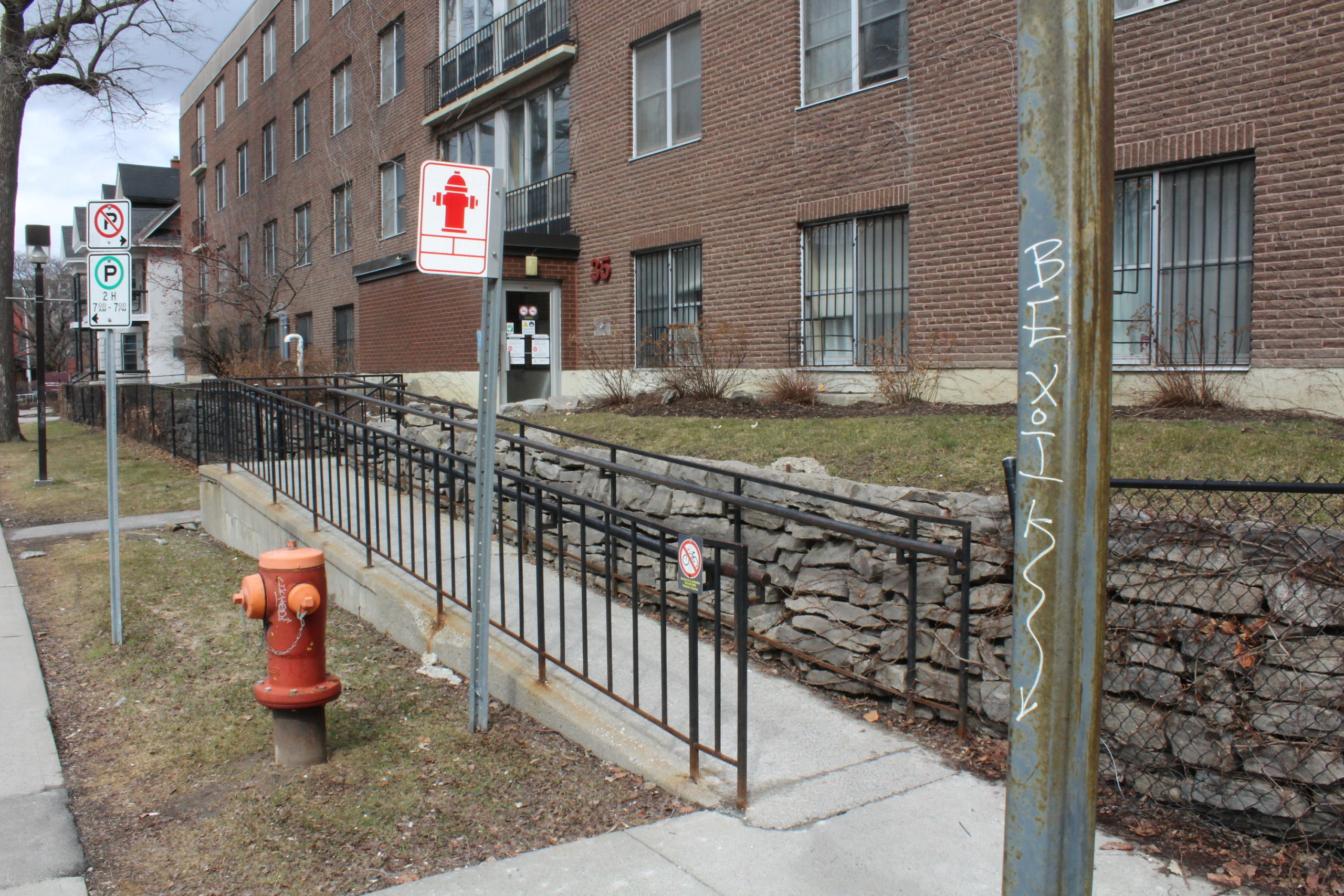 Two months ago, the Fulcrum published an article about the appalling conditions at the University’s LeBlanc residence. The University is committed to improving living conditions… but has it done so?

On the afternoon of March 26, seven weeks after our editor Charley Dutil’s first visit to LeBlanc, I arrived at the neglected residence, equipped with a camera to take pictures. Once again, its main hall was easily accessible to outsiders.

In our last article, we mentioned that the main entrance door and the door leading to the lobby previously had holes where the locks should have been. These holes have since been covered with a metal plate, but could still be opened by anyone.

I then reached the third door which could only be unlocked with a key card, but a resident immediately opened the door for me as he walked out. It looked like LeBlanc was just as easy to fit in as before.

I couldn’t find anyone in the ground floor hallways, so I decided to go up the stairs to the third floor. In the common room, I found a student who agreed to talk to me. They asked to remain anonymous for privacy reasons. This student was unaware of our last article, or some of the issues raised there, but he had his own concerns.

“I’m going to be so brutally honest about this place: I feel so bad for the people who get this for [their] freshman, like me,” the student said. “There’s really no one here. Everyone is going to like all the other residences because this one is kinda shitty. ”

I asked them if they were aware of the reported rodent droppings in the basement, and they said they didn’t as they generally avoided the basement.

“I’m too scared to go to the basement,” they said. “I hate having to go down there to do my laundry. I guess it’s so unsupported and I don’t know if it’s just me, but the laundry room smells like chlorine, and it just smells dirty in there. So I just try to stay [up here on the third floor].”

I thanked them for their time and decided to go down to the basement to investigate the infamous feces. I found the food lockers near the kitchen where the droppings were found and opened a few doors for inspection. I couldn’t find any obvious traces of excrement, but the inside was still very dirty. It looked like the feces had been removed.

I spotted another student in the kitchen preparing food and approached to talk to them. Turns out they were one of the students who shared their experiences in our first LeBlanc play. They were interested in being interviewed again for our follow-up article, and even informed their friend, who was also one of the first interviewees. We then went back to the ground floor to join them.

In the last article, we mentioned that these students met with a member of the Residents’ Association of the University of Ottawa (RAUO) who said that the University would improve security at LeBlanc and look into the necessary repairs. at the residence. I asked the two students if any of these promises had been kept.

Have any repairs been made since the article was published?

A student said he had noticed more construction workers recently. There were a few small repairs including installing a light in one of the showers and hiding exposed wires near the electrical panel on their floor.

“[The workers] chose to do it at nine o’clock in the morning, which is really boring. [It] it took them weeks to do it too.

The student I interviewed earlier on the third floor also mentioned that the residence elevators were fixed.

However, several problems regarding living conditions remain. According to one of the students, the first floor still has terrible heating.

“I have my own radiator, so that hasn’t been a problem,” they said. “But it’s the same: it was quite cold, at least on our floor. All the other floors say it’s too hot, but obviously we’re closer to the ground.

As I wandered the halls of LeBlanc alone, I noticed many other sanitary issues in the building. I first noticed several clumps of brown paste on the ceiling of the third floor common room.

The chairs in this area were also worn out and had large stains on them.

In the men’s bathroom on the third floor, yellow grime was visible through the shower drains.

Has the University tightened security?

Previously, the students informed us that a member of the “Freedom Convoy” broke into one of their rooms on January 30. I asked if the University had tightened security at LeBlanc since that incident, particularly in the wake of the proposed “Rolling Thunder” protests.

Apparently, there is still little to no security at the residence. Prior to Reading Week, students could see security guards in the main hall, who were present on certain days of the week. But since returning from Reading Week, residents see security guards about once a week, leaving the building virtually unattended. I asked them if they had witnessed any other disturbing incidents, and they replied that no one had disturbed them recently.

What did the students do?

When asked what the students did about the continuing problems at LeBlanc, one of the students told me that they pretty much gave up after the article was published because they thought it would fix things. . They would still contact the University when there were essential repairs, but the process was still tedious.

For example, one of the students has a neighbor whose power outlets constantly stop working. The students called the University several times before a worker came. Moreover, the repair itself would take several hours.

“I think at this point we just got used to everything,” said one of the students. They then added that every repair they see at LeBlanc is a “pleasant surprise.”

My last question to the duo was, do you regret choosing this residence? I knew the answer before they even spoke.

“Nobody chose that,” they said in unison. They told me that not only was LeBlanc not in any of their housing choices, it wasn’t even the first residence they were forcibly assigned to.

In an email to Fulcrum, a university spokesperson said that to improve security at LeBlanc, a second key lock will be installed on the second door leading into the building, along with a security. These additional layers of security will be put in place once the necessary hardware has been received.

In addition, a new student security patrol program will be available in residence starting in the fall. At this time, students are advised to be vigilant in order to prevent unauthorized persons from entering the building. The protection services must be contacted in the event of an individual’s intrusion into the residence.

The university spokesperson also confirmed the repairs mentioned by the students I interviewed. They also added that the kitchen and food lockers are now clean and all appliances are working. Facilities staff perform daily inspections of the residence and look for cleanliness issues.

Several other renovation projects are expected to be completed this summer, including stained ceiling tiles and peeling paint.