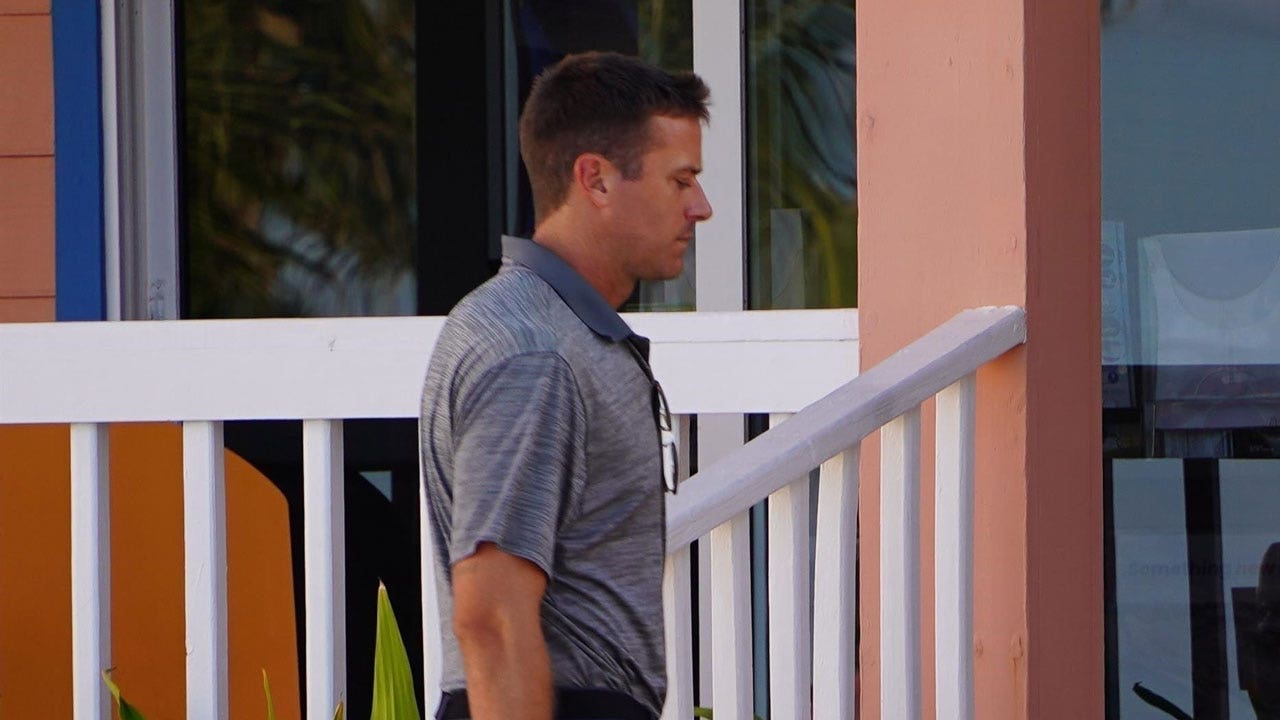 Armie Hammer is said to be “totally broke” following the sexual assault and cannibalism fantasy controversy he faced in 2021.

It has been reported that Hammer resurfaced selling timeshares at a hotel in the Cayman Islands. The news, which has not been confirmed by Hammer himself, made headlines after a flyer for Morritt’s Resort in Grand Cayman was shared on social media along with a picture of Hammer.

The hotel insisted Hammer didn’t work there, but claimed the actor sometimes hangs out.

However, Variety is now reporting that the photo is of Hammer and that he is selling timeshares.

“He works at the resort and sells timeshares. He works at a cubicle,” a source told Variety. “The reality is he’s totally broke trying to fill his days and earn money to support his family.”

Hammer is the great-grandson of oil tycoon Armand Hammer, but the source told Variety he is not on the family payroll.

Hammer’s attorney can’t confirm if the actor works at the resort, telling Entertainment Weekly, “I can’t confirm or deny it because Armie hasn’t spoken about it.”

“I just think it’s s—y that if he sells timeshares the media shames him for having a ‘normal job’. What’s the story here?”

A representative for Hammer did not immediately respond to Fox News Digital’s request for comment.

Hammer’s attorney could not confirm or deny whether the actor was selling timeshares.
(Photo by Terence Patrick/CBS)

Hammer has a long history with the Cayman Islands. The ‘Death on the Nile’ star moved there when she was 7 and lived there with her family for five years.

Hammer and his ex-wife Elizabeth Chambers ended up quarantining together in the Cayman Islands throughout 2020. The actor previously explained that he almost lost his mind during the lockdown, which he called ” draconian” in an interview with GQ.

“I think, to be quite frank, I almost completely lost my mind. I just felt completely helpless,” he told the outlet. “I felt so intensely trapped, like a wolf trapped and wanting to bite its foot. I was like, ‘I can’t do this. Get me out of here.'”

Chambers still lives in the Cayman Islands with the couple’s two children.

Chambers filed for divorce in July 2020 after 10 years of marriage. She cited “irreconcilable differences” in the court filing. Months later, Hammer was embroiled in controversy.

The BIRD Bakery founder broke her silence on the allegations against Hammer in February 2021.

The allegations against Hammer came to light in 2021, months after his ex-wife Elizabeth Chambers filed for divorce.
(Photo by Gregg DeGuire/FilmMagic)

“For weeks I have tried to process everything that has happened. I am shocked, heartbroken and devastated,” Chambers wrote on Instagram at the time. “Grief aside, I’m listening and will continue to listen and educate myself on these delicate issues. I didn’t realize how much I didn’t know.”

She added: “My only focus and attention will continue to be on our children, my work and healing during this incredibly difficult time. Thank you for all the love and support, and thank you in advance for your kindness. , your respect, and consideration for our children and me as we find ways to move forward.”

Chambers started dating again amid the divorce around August 2021, an insider confirmed to People magazine.

In January 2021, Hammer found himself embroiled in controversy after several women accused him of sharing sexual fantasies with them involving cannibalism.

Paige Lorenze, the actor’s ex-girlfriend, claimed Hammer had the urge to smoke and eat his ribs, which was “really disturbing.”

“He was talking about getting a doctor to take out my ribs that I don’t need — the ribs that are down — and that he had a smoker in his house. He wanted to smoke them and eat them,” Lorenze told Fox. . Digital News. “He wondered what they would taste like, and he thought, ‘I bet you they would taste good.'”

Vucekovich told Page Six that Hammer wanted to “break [her] ribs and barbecue and eat them.”

Another alleged ex-girlfriend, writer Jessica Ciencin Henriquez, didn’t reveal any details about her relationship with Hammer, but claimed on Instagram that she believed the posts shared by the anonymous account were “real.”

Hammer denied the allegations and said all sexual interactions he had were “consensual”.
(Photo by Todd Williamson/E! Entertainment/NBCU Photo Bank)

Hammer denied the allegations at the time.

“These assertions about Mr. Hammer are patently false. All interactions with this person, or any of his partners, were completely consensual insofar as they were fully discussed, agreed upon and mutually engaged,” the attorney said. from Hammer to Fox News Digital.

“The stories perpetuated in the media are a misguided attempt to present a one-sided narrative in an effort to tarnish Mr. Hammer’s reputation, and the communications from those involved prove it.”

In March 2021, Hammer became a suspect in a sexual assault investigation after a woman accused him of raping her in 2017.

“He repeatedly hit my head against a wall bruising my face. He also committed other acts of violence against me which I did not consent to,” she alleged during a press conference.

The woman also alleged that Hammer abused her “mentally, emotionally and sexually” throughout their relationship, which allegedly began in 2016 after the two met on Facebook.

“From day one, Mr. Hammer has maintained that all of his interactions with [the woman] — and all of his other sexual partners for that matter — were completely consensual, discussed and agreed to beforehand, and mutually engaged,” he said in a statement through his attorney.”[The woman]The attention-seeking and ill-advised legal bid will only make it harder for the real victims of sexual violence to get the justice they deserve.”

Although he denied the allegations, Hammer was reportedly dumped by his agency, WME, and removed from several projects.

Hammer had been involved in the Lionsgate film “Shotgun Wedding” with Jennifer Lopez. Amid the allegations, it was reported that her role would be recast.

“Armie has requested to withdraw from the film, and we support him in his decision,” a production spokesperson said in a statement to Fox News Digital.

Her role in “Gaslit” was also recast.

On top of that, Hammer quit his role in ‘The Offer’, a film about the making of ‘The Godfather’. The actor had been cast in the lead role of Al Ruddy.

Hammer spent time in a rehab center focusing on his drug, alcohol and sex issues in 2021, according to his attorney.
(Neilson Barnard)

He spent time in a treatment center

Hammer spent undisclosed time at a treatment center in Florida. It was first reported that the actor sought treatment for drug, alcohol and sex issues in May 2021.

In December, it was reported that the ‘Call Me By Your Name’ actor had left the establishment, although his release date was never given.

“I can confirm that Mr. Hammer has been discharged from the treatment facility and is doing very well,” Hammer’s attorney told Fox News Digital at the time.

Now, Vanity Fair reports that a source told them that Robert Downey Jr. was the backing behind Hammer’s treatment. The actor reportedly paid for Hammer to spend six months at the Guest House.

If you or someone you know is suffering from abuse, please contact the National Sexual Assault Hotline at 1-800-656-4673.

Lauryn Overhultz is an entertainment writer for Fox News Digital.