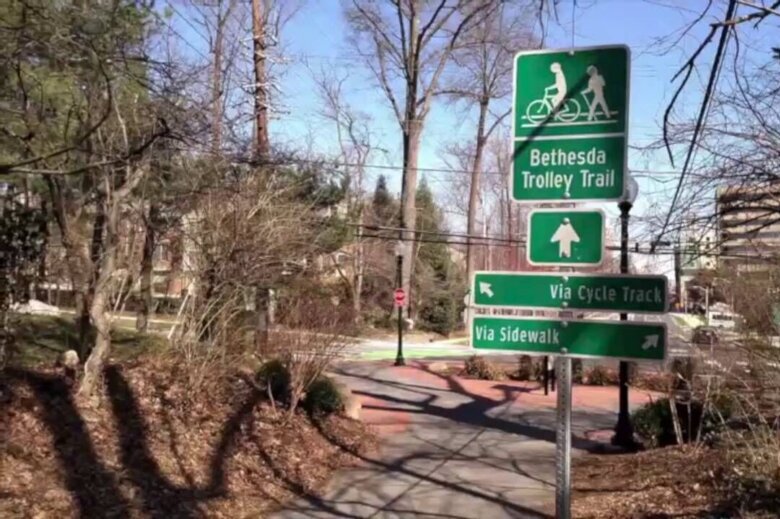 Montgomery County Executive Marc Elrich, Maryland State Delegate Ariana Kelly and candidate Joe Vogel were among those who responded to the incident, calling out hate and pushing back against xenophobic behavior.

Officials responded to reported vandalism around 6:45 a.m. along the portion of the trail near Arlington Road and Bradley Boulevard.

Spray-painted swastikas and white symbols of power were discovered on a white picket fence along the trail.

Police said no one was arrested and an investigation into the incident was ongoing.

Montgomery County Executive Marc Elrich responded to the incident in a statement, adding that bullying will not be tolerated and that the county will continue to work to “organize, unite and address the behaviors xenophobes”.

“I am saddened, upset and, quite frankly, disgusted by the racist vandalism that occurred near the Bethesda Trolley Trail this weekend,” Elrich said. This incident follows other recent vandalism and hate attacks across the county in recent months.

Maryland State Delegate Ariana Kelly shared edited footage of the vandalism in a tweet, stressing that “hate has no place in our community.”

HATE HAS NO PLACE IN OUR COMMUNITY. I heard a number of constituents this morning talking about white nationalist vandalism along the Bethesda Trolley Trail. I share an edited image below. The police are involved. pic.twitter.com/rbPmSOrSkX

Joe Vogel, the Democratic candidate for delegate in Maryland’s 17th district, echoed his comments in a tweet Sunday afternoon.

“It breaks my heart to see acts of violence like this in our community,” Vogel said.

Community members who see incidents like this or any other hate crimes can report them to the Montgomery County Police Department.