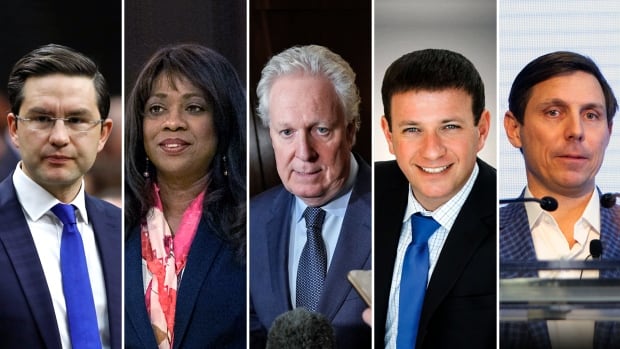 The Conservative Party of Canada today released the list of candidates who will appear on the ballot when party members vote for a new leader in September – and it does not include two candidates who say they have raised enough money and signatures to qualify.

In a social media post, the party said Conservative MPs Scott Aitchison, Leslyn Lewis and Pierre Poilievre, Brampton Mayor Patrick Brown, former Quebec Premier Jean Charest and Independent MPP for Ontario Roman Baber have been accepted by the Leadership Election Organizing Committee (LEOC) as “verified” candidates. This means they have at least $300,000 to pay a series of registration fees and $500 endorsement signatures from members in 30 different constituencies.

Two candidates — Joel Etienne, a Toronto business lawyer, and Joseph Bourgault, a Saskatchewan business owner — will not make the final ballot, despite their claims that they meets party demands be considered “verified”.

But candidates need more than money and signatures to advance.

According to the party’s leadership election rules, the Leadership Contestant Nominating Committee (LCNC), the group of party stalwarts that reviews the nominations of potential candidates, may also rely on “any other information that he deems appropriate in determining the suitability of an applicant”. The LCNC may, in turn, recommend to the LEOC that a particular candidate be barred from running.

Bourgault, president and CEO of Bourgault Tillage Tools, is a social conservative who has been strongly backed by Campaign Life Coalition (CLC), an anti-abortion group that has long sought to pull the party to the right on social issues. .

In addition to his anti-abortion credentials, Bourgault was a member of the so-called Freedom Convoy and participated in protests against COVID-related measures like vaccination mandates on Parliament Hill earlier this year.

In a letter to his supporters last week, Jack Fonseca, the CLC’s director of political operations, said it was crucial to get Bourgault and at least two other candidates on board – Conservative MP Marc Dalton and Grant Abraham, a consultant from British Columbia – in the race to advance a “pro-family” agenda within the party.

Those efforts appear to have failed – the only “so con” candidate still in the running is Lewis.

Reached by phone on Monday, Fonseca said Borgault’s exclusion from the final ballot “looks like deception”.

“It’s the same kind of corruption the party used to disqualify Jim Karahalios and Richard Décarie last time – they don’t like their opinions and that’s why Bourgault is absent, despite the apologies they will publicly say” , he added, referring to two social conservative candidates who were barred from running in the last leadership election.

Bourgault did not immediately respond to a request for comment.

Fonseca said any attempt by the Conservative Party to “purge itself” of social conservatives would damage its electoral fortunes in the upcoming campaign.

He said some anti-abortion activists might move to another party seen as more welcoming to their cause.

“We have the corrupt Red Tory establishment disqualifying ‘so cons’ left and right because they can get away with it and they are destroying the party in the process. That only pushes people into the arms of Maxime Bernier and the People’s Party and they think they’re wonderful at doing it,” Fonseca said.

Fonseca said the People’s Party’s relative success in the last federal election – Bernier and his candidates got around 5% of the national vote – was due to a number of staunchly conservative voters who were fed up with what he called “liberal-lite” policies.

He said the anti-abortion movement’s last hope in this leadership race is Lewis, a candidate who has promised to table a series of Conservative social measures if she ever makes it to the prime minister’s office. Lewis said she wanted a ban on “sex-selective” abortions and criminal penalties for “coercive” abortions.

“If they could take out Leslyn Lewis, they would. But she’s too high profile and too popular with party members. They know it would totally destroy the party if they did. She’s the only one we can have trust,” Fonseca said. .

Speaking to Radio-Canada, CBC’s French-language service, Etienne, the other rejected candidate, said he personally delivered the required documents to the party office in Ottawa last Friday at 2 p.m., well before the deadline imposed by the LEOC.

He said he was later told that the party would not accept credit cards as payment for some of the necessary fees.

Etienne also said the party dismissed some of the signatures it collected as “invalid”, but was not told why.

In an email to CBC News, Wayne Benson, the party’s executive director, said “Mr. Etienne did not meet all of the necessary requirements by the deadline.”

Benson did not immediately respond to a request for comment on the decision not to outvote Bourgault.