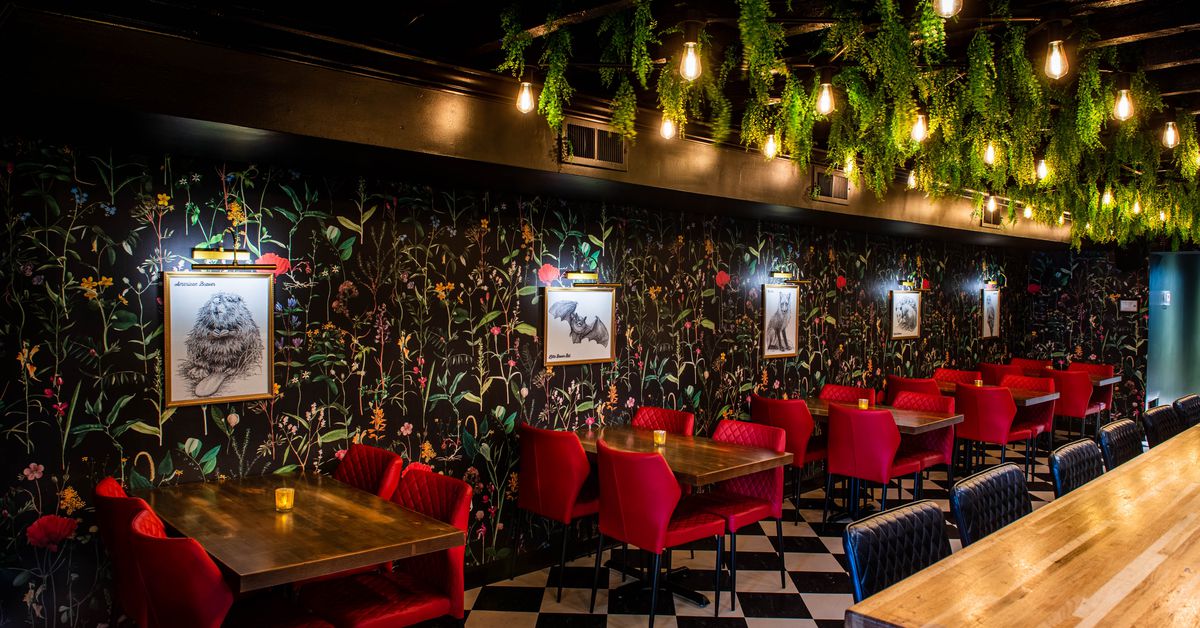 The freshly served amaretto sour cocktail at DC Vegan’s new Botanical Bar proudly sports a frothy head. But instead of using egg whites, the frothy top of the cocktail is courtesy of an animal-free chickpea liquid.

Exactly one year after DC Vegan launched its Dupont deli, the meatless restaurant is sprouting a surprise cocktail one tier below. The lush, underground setup, which opens Saturday, May 28, focuses on craft cocktails, local beer, wines, and a host of zero-proof options.

DC Vegan founders and husband-wife duo Leah Curran Moon and Michael Jantz Moon started a vegan restaurant business in 2015 in Union Kitchen. Just a year ago, they became a casual delicatessen (1633, rue P N.-O.). Next step: an ambitious basement bar project that evokes “being in the Garden of Eden at midnight or in a small refuge”, explains Leah Curran Moon, who also designed the bar.

As soon as you enter, local flora and nocturnal fauna cavort on the walls. “Dark and sexy” wallpaper she sourced from Transylvania, alongside “rich, inviting colors, shimmering lights and dreamy textures,” fills the balance of the rectangular-shaped den that seats 55 people.

Bar manager Starla Newman creates cocktails and mocktails using only plant-based ingredients, with an emphasis on herbs and flowers. Drinks are available in the indoor bar area, as well as in the dog-friendly outdoor park. Hours are 4 p.m. to 12 p.m. to start.

The vegan oasis offers cocktails like a delicate Bellini peach, topped with a garnish of edible flowers, and a limoncello topped with homemade basil oil droplets. The hot pink Flower of Life seasonal drink uses vodka, hibiscus tea syrup, a dash of lemon oil, and the aforementioned aquafaba.

Jantz Moon notes that commercial wine is often filtered through fish glue, derived from fish bladder or other animal products like chitin or gelatin. As a result, Botanical Bar only serves certified vegan wines. The beer selection relies on local beers, although milk stouts are evident. Jantz Moon also doesn’t drink alcohol, so he makes sure there’s a long, zero-proof list.

“We have a lot of health-conscious plant-based customers and we want to be inclusive with customers. We want to be intentional — we don’t just want soda and lime,” he says.

“We wanted to stop eating animals, but we didn’t want to give up our culture and the traditional foods that we grew up eating,” says Curran Moon. “We’ve spent years tweaking my Italian grandmother’s recipes retaining the flavors and textures while making them vegan.”

At the Botanical Bar, lightly fried King Trumpet mushroom rings with just the right chew factor are tossed with cashew parmesan for a believable calamari bowl. Cauliflower Bites are his take on chicken wings, drizzled with savory BBQ or Buffalo sauce.

“I grew up near Buffalo, so I’m a big wing fan,” she says. The rest of the regular menu will also be available.

The bar will launch main courses and table service in the coming months, with options like hearty lasagna and Chesapeake donuts, or “crab” cakes made from hearts of palm.

After its big weekend launch party, the Botanical Bar has big plans for June. Located directly on the Pride Parade route and near many LGBTQ nightlife destinations, DC Vegan will host Pride events including drag shows and other themed parties.