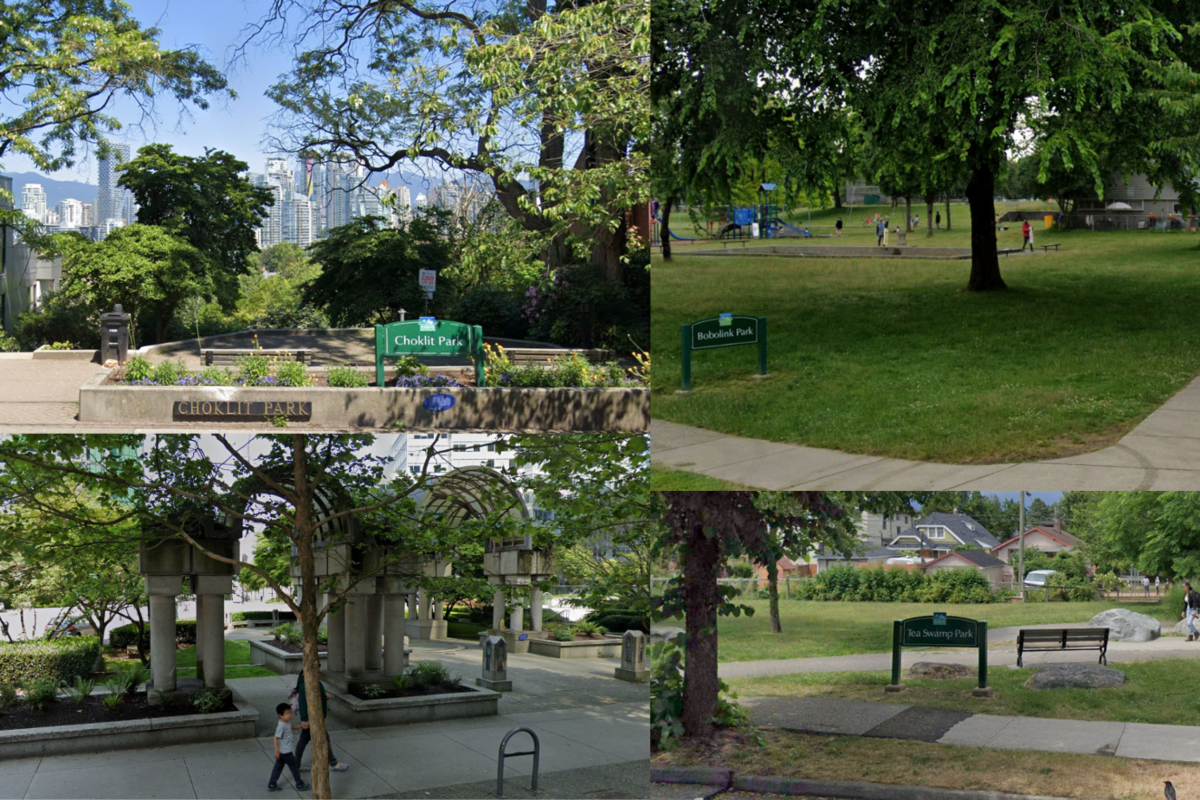 Vancouver has 250 parks, and many of them have pretty boring names.

Coal Harbor Park is in Coal Harbour, Captain Cook Park is named after Captain Cook, and Riverview Park is by the river. There is a simple explanation for all of this.

There are some with some fun facts though, like Stanley Park. He’s named after the same guy who gave the Stanley Cup its name (he was an English Earl and Governor General of Canada for a time).

And there is Garden Park. There’s no garden of note (but that’s okay!) as it’s named after one of the city’s former mayors, James Garden. It’s not like Captain Cook Park has a captain or a cook there.

Then there are the parks with unusual names. For example, Ebisu Park, named after a Japanese god. It takes its name in honor of the Japanese community of Marpole. Here are some more.

Yes, that’s a phonetic spelling of chocolate, the essential snack/food (depending on who you ask).

The park was established in 1970 at the intersection of Spruce Street and West 7th Avenue. Although it’s all residential now, the area used to be a more industrial area and Purdys Chocolates was based there.

They had an awkward entrance, so co-owner Charles Flavelle made a deal with the city to rework it. In exchange, the company established a park and it was dubbed Choklit Park after the company’s product.

According to Flavelle, the odd spelling came from one of the “gang of five hippies” he hired to build the park, who suggested it was how a child would spell chocolate.

It may sound unpleasant, but it was once an accurate description of the area.

The small park at East 15th Avenue and Sophia Street takes its name from the Labrador tea trees that once lived in the park area. The plant grows in swamps in bogs.

It is worth noting that Labrador tea is not a real tea and actually three species of Rhododendron. Although commonly used in various ways by indigenous groups, including as a herbal tea, the plants can be poisonous and excessive consumption is not recommended.

This one has two unusual parts. It’s capitalized and it’s “in” a place.

In 1987 it was built and called Portside Park after a group called Create A Real Available Beach advocated for a beach near the Downtown Eastside in the early 80s.

They had gone so far as to set up camp on the land they thought could be reused (which belonged to the federal government). It was an unused portion of the waterfront leased by the Vancouver Port Authority.

In 2004, the city renamed it to its current name, CRAB Park at Portside, to honor the group’s efforts.

The Port Authority still has authority over the land, although the park is managed by the city’s parks board, which has impacted how park issues have been handled in the past.

This one is related to the strange naming of streets in Vancouver that occurred when developments took off after World War II.

Although most who know the name say it’s not named after the Bobolink (a bird that rarely appears in British Columbia and never in Vancouver), there is an argument. It’s unclear exactly where the name of the Highland Park course comes from, but its logo is a Bobolink, and other golf courses with the same name cite the bird as the source.

Before you get excited, there’s no hidden portal to an amazing place here.

But there is (in a sense) a hidden portal here. It just doesn’t lead to an amazing place.

The park is built above a railway tunnel. It was built in the early 1930s and the Canadian Pacific Railway used it to move freight trains. It’s not a thing anymore, but the tunnel still exists. The SkyTrain uses it now.

One is about Dude Chilling Park. If you thought that was the name of the park, you would be wrong. It’s actually Guelph Park, located on Guelph Street. So it’s not a very interesting park name. The Dude Chilling Park sign is considered art, not infrastructure.

The other is a very odd park name, but it’s located just outside of Vancouver. West Vancouver has land called Suicide Bend Park. Located on a section of Marine Drive with an infamous curve known as Suicide Bend, the park appears in city documents but does not appear to have a sign.