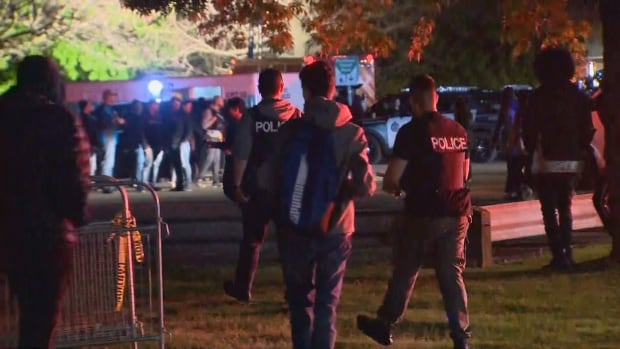 Police said they made five arrests following a City of Toronto fireworks display on Victoria Day, after arresting 19 people in the same area a day earlier.

The force said a fireworks display took place along Ashbridges Bay on Monday evening and was largely peaceful.

Police allege three people were arrested for setting off fireworks in the area, including a 19-year-old man who threw fireworks into a crowd.

Police also allege that two people were arrested on a transit bus after making threats with a gun.

A recovered firearm was deemed a replica and one person was released without charge.

Police said they are still investigating the stabbing of a 23-year-old man during an altercation.

Police said they arrested 19 people in the Ashbridges Bay and Woodbine Beach area on Sunday.

They say crowds of people set off fireworks that night, sometimes pointing them at other people. There were also reports of a shooting, stabbing and two robberies at gunpoint on Sunday evening.

Police said seven officers were among the injured, including one who broke his leg and three others who were burned or cut by fireworks allegedly thrown at them.

City bylaws prohibit the possession of fireworks on beaches and parks.