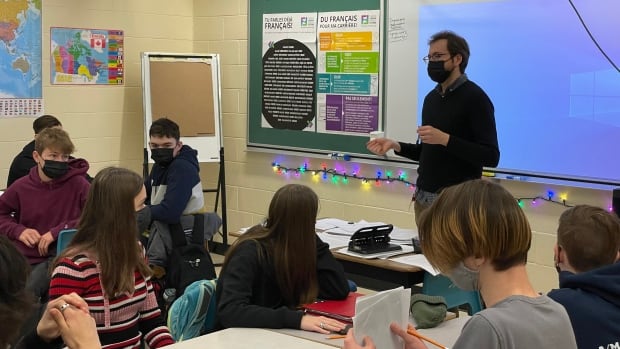 Nineteen New Brunswick pediatricians have written an open letter to the government calling for the reinstatement of universal masking in schools and for preschool staff.

Mask mandates in schools were removed last month alongside all other mandatory COVID-19 restrictions.

In response to fear and criticism from the public — and increasing hospitalization and case counts — Premier Blaine Higgs and Chief Medical Officer of Health Dr. Jennifer Russell said if the Department of Education wants to reinstate the mandate, it can.

However, Education Minister Dominic Cardy said it’s up to “the experts” to make that decision, not politicians like himself.

“When [scientists and experts] have something to tell us, they need to speak up,” he told a news conference Wednesday.

The 19 pediatricians took the minister up on his offer.

“We do not believe we are out of the woods yet with the COVID-19 pandemic,” they wrote.

In their letter sent to Cardy, Higgs, Russell and Health Minister Dorothy Shephard, the doctors said COVID-19 is an airborne virus, and masking and vaccination are proven protections against transmission and severity of infection.

“Given the importance of school for child development and well-being, we strongly recommend returning to continuous mask use indoors for the rest of the academic year, so that students and staff can remain healthy and attend,” the doctors wrote.

Dr. Sarah Gander, one of the signatories, said the letter was written on Thursday, sent out to doctors across the province, and forwarded to the government Sunday night.

“It was quite a quick turnaround,” she said.

Gander said “the proof is in the pudding” when it comes to the importance of mask-wearing in schools. She said the number of children and families infected has increased dramatically since the restrictions were lifted.

The number of Vitalité Health Network employees absent from work because of COVID-19 has jumped 41 per cent in eight days, with 352 workers off because of COVID-19 as of March 30. School district data also showed a spike of teachers calling in sick after March break.

Gander said there is a right time to remove mask mandates, but it’s not now.

She said it’s not the right time because doctors don’t understand how soon a person can be reinfected, as the data is not clear.

Also, the rate of vaccination for children between five and11 years old is lagging, and many don’t have their second dose and aren’t adequately protected.

The province is also not in a place where people continue to wear masks when they’re feeling unwell, even if they’re not mandatory.

“It’s not just an all-or-none phenomena,” she said.

Gander said once the summer comes, windows can be opened and case counts and vaccination rates look better, mask mandates could be loosened more safely.

“In addition to protecting children, many health-care and education workers are parents, and this will help moderate the number of workers off due to infection or exposure,” the letter said.

The doctors pointed to Nova Scotia, Prince Edward Island and Newfoundland and Labrador, which have all kept masking requirements in schools.

“Reinstating mask mandates in school and child-care settings is not only the most responsible course of action, it is also consistent with measures in the other three Atlantic provinces,” they wrote.

Gander said the message she hopes officials come away with is it’s not a failure to reinstate mandates.

“True leadership and integrity in leadership has the ability to change your mind with new information that’s been provided,” she said.

“What I’d like to see leadership do is say ‘OK, we’ve seen what happened. It’s not working. Let’s go back to masks indoors for schools and daycare facilities and then see if we can get through these next couple of months .'”

The letter said the Nova Scotia Pediatric Pandemic Advisory Group, which is made up of pediatric specialists from the IWK Health Center and surrounding communities, also agrees that mandatory masking in schools should continue.

“We are requesting the same for our children,” the doctors wrote.

Cardy is holding a news conference to answer media questions at 2:45 pm