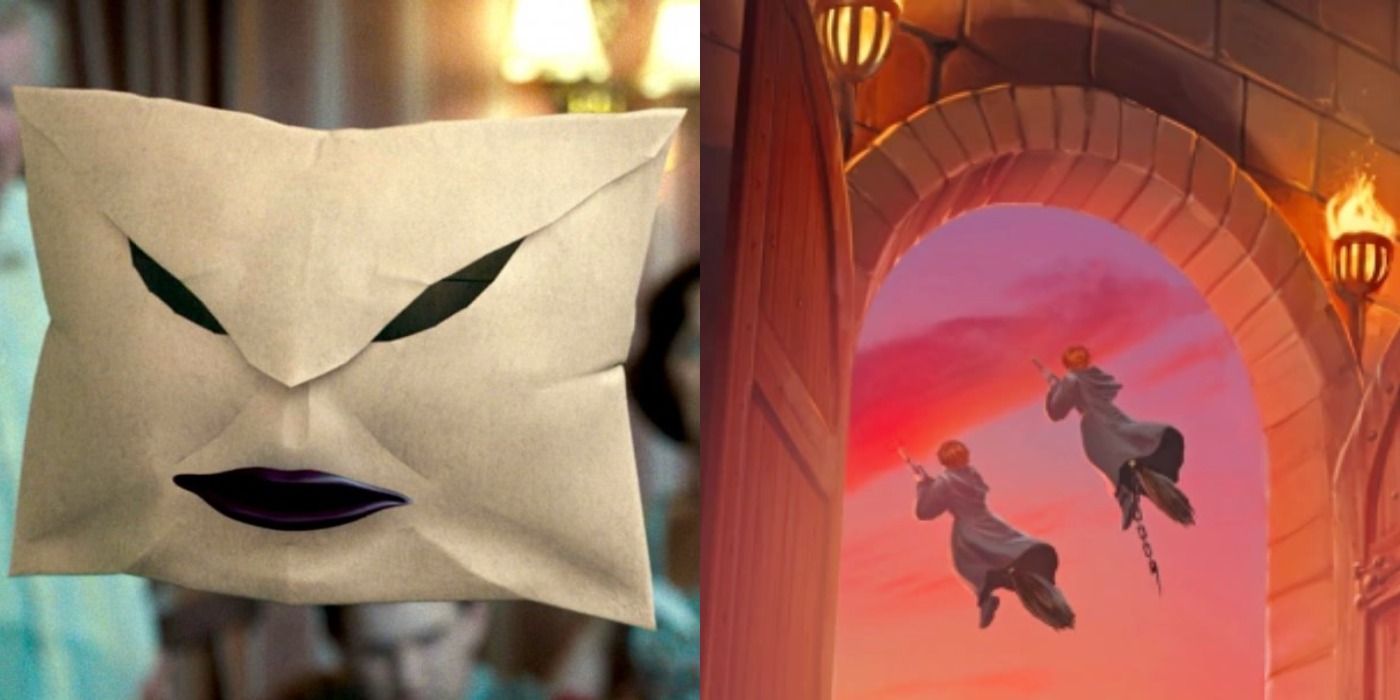 If there’s one thing that frustrates a lot of Potterheads about the Harry Potter movies, it’s the amount of fantastic content in the books that they lack. From entire stories to plot explanations to singular, contained scenes, the books are full of brilliance the movies should have used in fan opinions, which Ranker can attest to.

RELATED: 10 Unpopular Opinions About The Fantastic Beasts Movies, According To Reddit

Many, many Potterheads have voiced their opinions on the site, including some amazing book moments that deserved a spot in the movies.

Howlers only appear a few times in the Harry Potter movies, but there is one significant Howler from the novels omitted from the screen adaptations, i.e. Albus Dumbledores to Petunia in The order of the Phoenix.

The Howler was reacting to everything that had happened with the Dementor and reminding Petunia of the pact that they had to secure Harry’s living conditions at Privet Drive. It’s a moment the movie could have included, as well as the interaction Harry and Dumbledore have about it later in the book.

The Arrival of the Centaurs at the Battle of Hogwarts

There were plenty of differences and inclusions in the epic Battle of Hogwarts that could have enhanced the thrilling climax of The Deathly Hallowsone of which is the presence of the Centaurs.

How they arrive at the battle of The Deathly Hallows the novel is crap. Many Potterheads feel that Firenze was a bit dirty overall, far from being the best-designed magical creatures, and this sequence could have been another great part of an already exhilarating sequence of events.

Peeves had a deleted scene in The Philosopher’s Stone, but like so many other brilliant aspects of the books, it was otherwise completely cut from the Wizarding World films. It is one of his scenes that Ranker deems worthy of a film appearance.

This comes after the Weasley twins humiliate Umbridge and ask them to tell Peeves to give her hell. His greeting response is noted as being the first time Harry has seen the mischievous poltergeist obey a student, showing not only the relationship he had with the Weasleys, but also how troublesome the three were.

Snape demands that the term “mudblood” not be used

Snape is one of Harry Potter’s more complex characters, with debates still raging about the extent to which he is a villain or a hero. It’s one of those moments that shows his humanity in dark circumstances but is missing from the novel.

RELATED: 10 Times Harry Potter Ignored His Own Logic, According To Ranker

When Phineus Nigellus comes to tell Snape about Hermione in the Forest of Dean, he refers to her as a Mudblood, to which Snape promptly replies, demanding that he not use that word. It’s another one of those interesting moments that sees Snape toe the moral line, obviously defending Hermione for her reasons.

Ron fires back at Snape

Harry Potter and the Prisoner of Azkaban

The Golden Trio all have very different elements to their characters between the books and the movies, and one big Ron moment that’s missing from the movies is his defense of Hermione against Snape.

Throughout their time at Hogwarts, Snape lashes out at the golden trio, particularly Harry’s celebrity status and Hermione’s mastermind. On one occasion in The Prisoner of Azkaban, Ron takes issue with Snape embarrassing Hermione and tells her that “You asked us a question, and she knows the answer! Why ask if you don’t want us to tell you?” It’s a great moment from Ron that also shows the difference between being scolded by an enemy and being “insulted” by a friend. Many scenes from the books would have been impossible to adapt into the movies, but it could have been included relatively easily.

Harry makes a few attempts to use the Cruciatus Curse, one of the three Unforgivable Curses, in the Harry Potter movies, but its only successful use in The Deathly Hallows is not shown.

It comes when he defends Professor McGonagall from Amycus Carrow, who spat in McGonagall’s face. Amycus undoubtedly deserved the curse, and it would go a long way to show just how breaking point Harry was in The Mortal relics at the time of the film’s final battle if that moment had been included in any way, shape or form.

Harry has many amazing friendships and character dynamics, one of the sweetest being the one he shares with Professor McGonagall. One of the sweetest, quietest moments they share was omitted from the movies.

RELATED: 10 Quotes That Prove Harry Potter Is A Fool

In The order of the Phoenix, McGonagall asks Harry about his shouting at Umbridge and how he commented on Voldemort’s return, all before rather kindly offering Harry a cookie. Not only is it a moment between two friends, but it’s also a showcase of McGonagall’s well-established disdain for Umbridge, which is always nice to see.

One Hogwarts professor that the public does not see being watched by Umbridge while teaching is McGonagall. It happened in the books, though, and it was amazing.

While the other teachers in the film all come to terms with Umbridge’s ridiculous assessment of their abilities, McGonagall isn’t afraid to stand up for herself and applaud the obnoxious Ministry employee. Her brilliant and stoic response to Umbridge’s observation of her teaching methods would have been a welcome inclusion in the film, but given that the film was more interested in showing off her power and how bad she could be of a Hogwarts professor, we understand why he was left out.

Professor Dumbledore berates the Dursleys for their treatment of Harry

Harry Potter and the Half-Blood Prince

Many fans often wonder why Dumbledore would leave Harry with the Dursleys after proving them to be abusive and overall terrible family members. In the books, at least, he berates them.

In The Half-Blood Prince, Dumbledore calmly but coldly lets the Dursleys know that they have done a disgusting job of acting as Harry’s guardians and protectors. The Dursleys really deserve a verbal beating for the way they neglected Harry, and to see that in the movie would have been incredible, especially as one of the last showcases of Dumbledore’s care for Harry before he died.

The Complete Battle Between Molly Weasley and Bellatrix LeStrange

Harry Potter and the Deathly Hallows: Part 2 is packed with so many amazing and memorable moments, including the short duel between Molly and Bellatrix that sees the latter rightfully die. Ranker users, however, think the full fight would have been better.

In the novel’s counterpart, the iconic “Not my daughter, bitch!” remains, but the exchange before Bellatrix disappears is much longer, with more movement and Harry present to observe events. It would undoubtedly have been better had it been longer and more comprehensive, but that doesn’t make their short exchange bad.